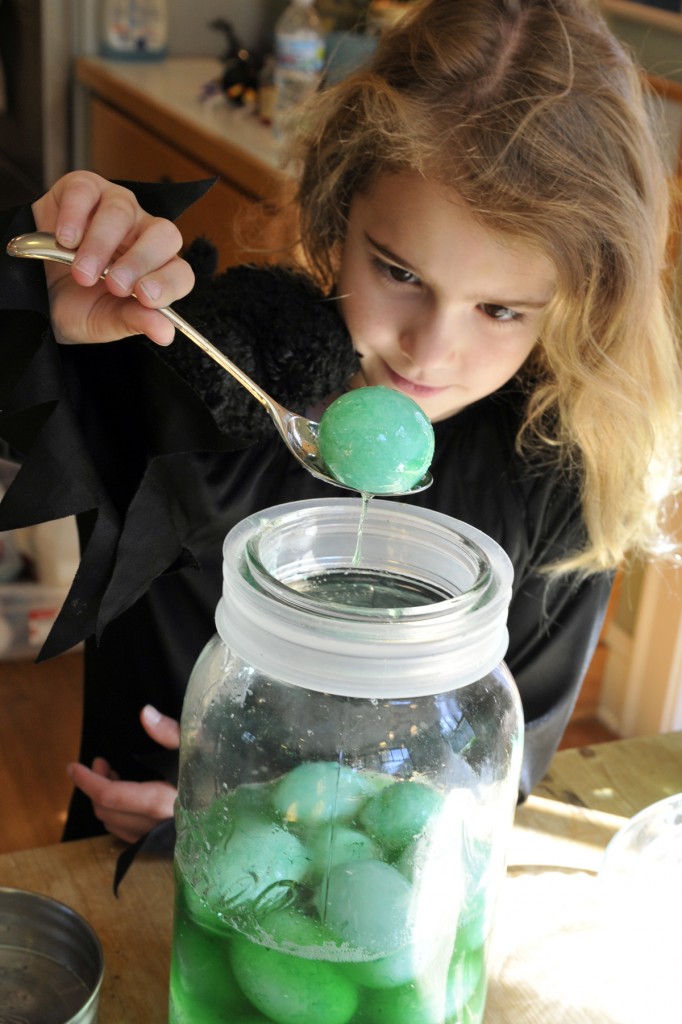 Here’s how to make them!

Now that it’s summer, move your science lab outside and try doing the Tablecloth Trick or Throwing Eggs.  If you’d rather check out the power of the sun, try making a solar oven from a pizza box!  You probably have everything you need for these experiments right in your kitchen, and if you don’t have a pizza box, just save one next time you order out.

What are you waiting for?  Have fun! 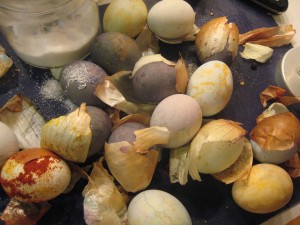 Make your own egg dye!  Boil colorful fruit, vegetables and spices with 4-8 cups water and a few Tbs. of white vinegar.  When the water is boiling, add raw eggs and boil for 10 minutes.  The pigment in the fruits and veggies will be absorbed by the egg’s porous surface as they cook.  Let the eggs sit in the dye until cool.  Then, wrap the wet eggs in onion skins or rub with paprika for yellow.  We had the best luck with blueberries, curry and red cabbage.  Experiment  to see what makes the best colors!  What worked best for you?  Coffee?  Tea?  rhubarb? Don’t forget to eat your creations.  Hard-boiled eggs make a great snack! 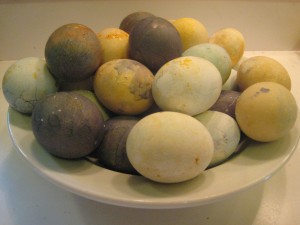 I am cooking hard-boiled eggs as I write so that we can do a quick experiment before dinner.  My kids will always drop whatever they’re doing to do a science project and I am thrilled to see them so enthusiastic about something that doesn’t involve screen time or sugar.

The first experiment involves dissolving eggshells in vinegar.   Put two raw eggs into two juice glasses or jars and cover the eggs with (white or cider) vinegar.  Let them sit overnight and see what happens.  Before handling the eggs, gently rinse them with water.  Only the membrane of the egg will remain, which is like a rubbery balloon.)  It’s pretty neat.  Have your child draw or record what they observed and how long it took to dissolve the shells in their science notebook.  (See earlier post.)

What happened?  The shells are dissolved by the vinegar, which is an acid.

The second experiment uses the eggs with the dissolved shells that you made in the one.   Return the eggs to two empty glasses or jars.  Cover one egg with water and the other with corn syrup.  Leave them for 24 hours in the refrigerator and see what happens.  Have your child record their results!

What happens?  From what I understand, the balloon-like membrane of the soft eggs will let water molecules pass through.  The egg will expand appear even more balloon-like as it becomes filled with water.  I can’t wait to see what happens with the corn syrup egg.  I’m guessing that the membrane may not let the corn-syrup molecules through.  That’s my “hypothesis”, but I won’t know until we complete the experiment.  Ask your child what they think will happen.

For the final experiment, you will need a glass bottle who’s neck is a little smaller than a hard-boiled egg, and the hard-boiled egg itself.  It’s called Egg-in-a-Bottle.  I went out to my recycling bin and discovered that my Trader Joe’s grape juice bottle is the perfect size.  It obviously requires adult supervision and I have to admit that we’ve had varying sucess with this, but when it works, it’s really neat.

Peel the hard boiled egg, set it on the bottle, and let your children verify that it won’t easily squeeze through.  Then, remove the egg, light three matches and drop them into the bottle.  They may not stay lit for long, but it doesn’t matter.  Do it fairly quickly.  I had the best luck dropping them in unlit end first.  Then, set the egg back on top of the bottle before the matches go out and watch the egg get sucked into the bottle.  (My matches went out just before I put the egg back on top of the bottle, and it still worked.)  It’s pretty cool!