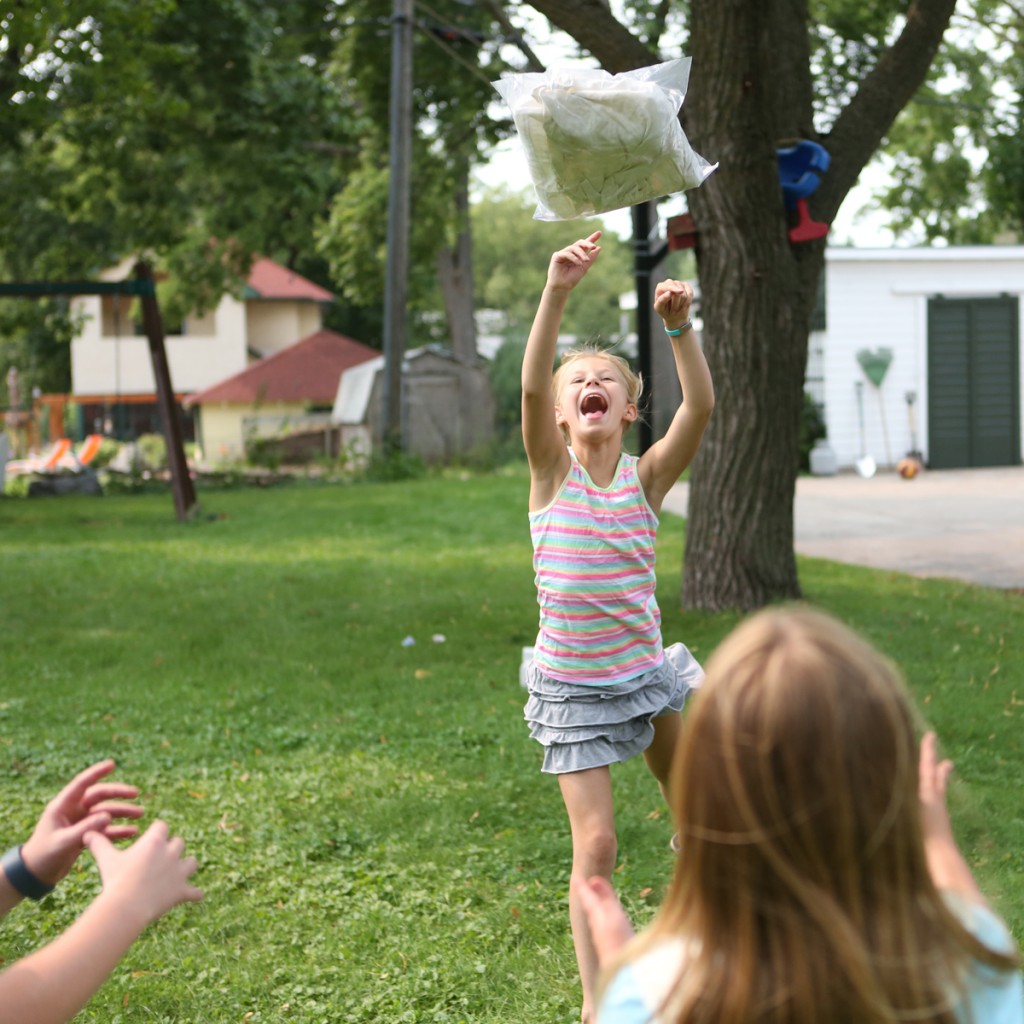 Brrr. It’s really cold here in Minnesota. Perfect for making ice lanterns by filling balloons with water and setting them outside the back door. I had a great time talking ice lanterns and homemade ice cream (an edible experiment in my new book) on WCCO MidMorning this AM. As promised, here’s the recipe for “Ice Cream Keep Away.” After all, it’s never to cold to eat ice cream.

Step 2.   Add one cup of ice cream mixture to a quart or pint-sized freezer bag, squeeze out some of the air and zip it closed.

Step 3.    Place the small bag of ice cream mixture in a second small bag, squeeze out the air and zip it closed as well.

Step 4.     Place the double-bagged ice cream mixture into a gallon-sized bag and fill the larger back with ice.

Step 6.    Wrap a dish towel around the bag of ice and place it in a second gallon bag. Zip the outer bag closed.

Step 7.   Play catch with the bag of ice and ice cream for ten or fifteen minutes.

Step 8.   Remove the bag of ice cream mix from the outer bag and enjoy your frozen treat. 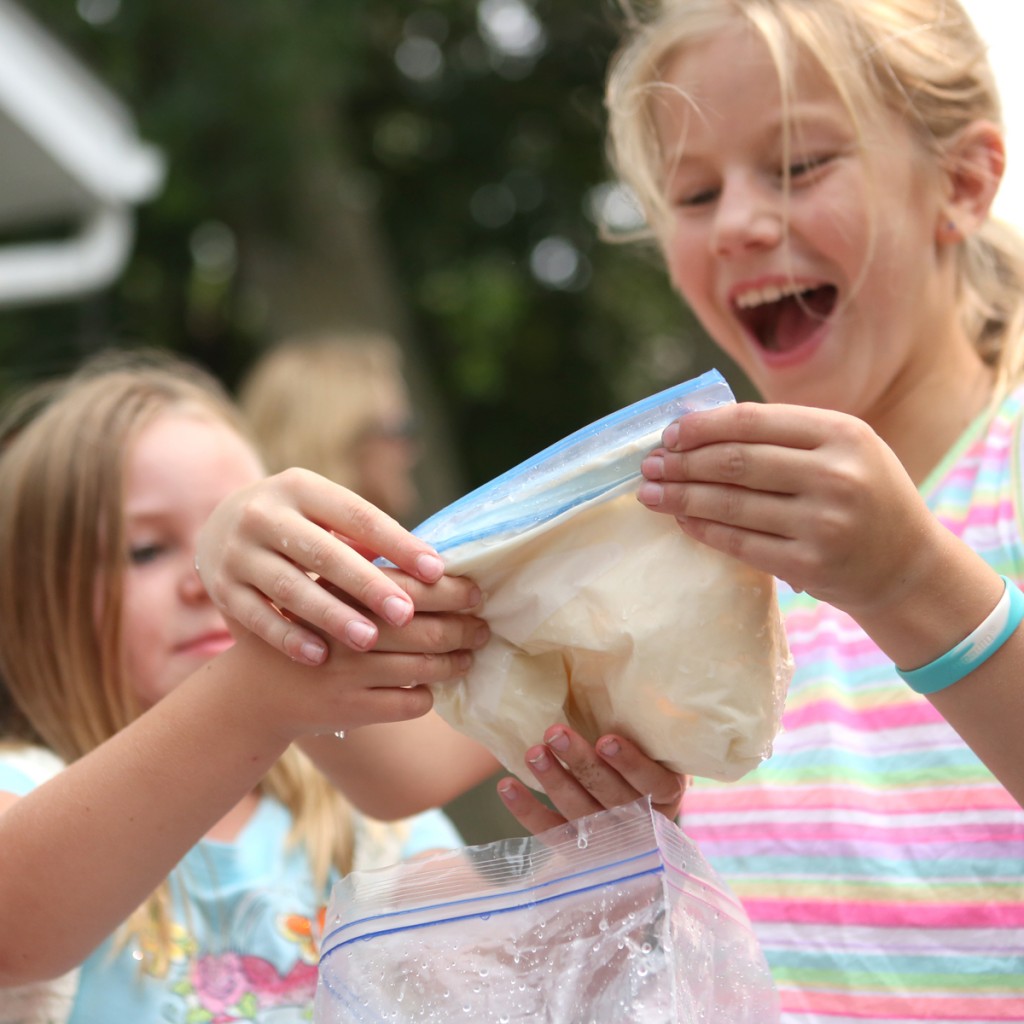 The Science Behind the Fun:

Making ice cream is a lesson in heat transfer and crystallization.

In this lab, adding salt melts the ice, making a really, really cold ice-salt-water mix. The icy salt water pulls, or transfers, heat out of the ice cream mixture, freezing the water molecules in the milk and cream into ice crystals.

Depending on how fast ice cream freezes and what ingredients it contains, the ice crystals will be different sizes. If you freeze the mixture very fast, you will probably get big ice crystals that make the ice cream grainy. Ingredients like gelatin encourage smaller crystals to form, making smoother frozen treats.  Adding emulsifiers like eggs to the mix helps the fats and water combine better, creating ice cream that thaws more slowly.

You can’t judge an egg by its shell, but you can use science to figure out whether or not it’s fresh. 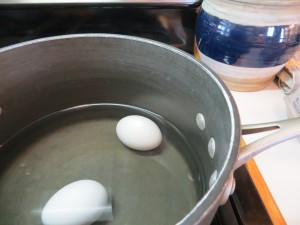 Imagine an egg. It can be white or brown, since they’re identical except for shell color. There are two membranes inside an eggshell, separating it from the inside of the egg and helping to keep it safe from microbial invaders.

Under the membranes is the egg white, made up of proteins and water, and the yolk, which also contains fat and is enclosed in a sac. Tiny rope-like structures anchor the yolk between either end of the egg. The egg white contains a substance called lysosyme, which is a potent antibacterial. Eleven percent of an egg’s weight is made up by shell, 58% by white and 31% by yolk.

When a hen first lays an egg, the raw egg white contains carbon dioxide, making it look cloudy, and the proteins in the egg white are freshly folded into their correct protein shapes, so it will hold a nice shape in a pan. However, egg shells contain thousands of tiny pores, some big enough to see with the naked eye, and as an egg sits, it changes.

The contents begin to slowly shrink, and a small air pocket forms between the two membranes, usually at the large end. The egg’s pH, about 7.6 when first laid, rises as the egg ages and loses carbon dioxide. In just a few days, the pH may reach 9.7, causing the egg white to look clear and spread out more in a pan when the egg is broken. 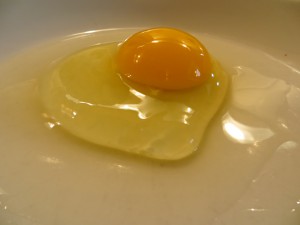 The nicer shape and centered yolk of fresh eggs is why they’re recommended for frying. But why are older eggs better for boiling, and why does the yolk turn green sometimes?

Fresh eggs are harder to peel. When you boil an egg, it cooks from the outside to the inside, and its proteins become unfolded, or denatured. The denatured proteins are more likely to stick to the membranes on the eggshell of a fresh egg because the pH is lower. According to “FOODS, A Scientific Approach” by Charley and Weaver, eggs are easier to peel if their pH is greater than 8.7. In other words, old eggs that have lost carbon dioxide have a higher pH (are less acidic) and are easier to peel.

Sometimes, when you boil eggs, you see a greenish/gray/blue layer on the outside of the yolk. It’s the harmless product of a chemical reaction between the iron in the egg yolk and sulfer-containing proteins in the white. You can try to avoid it by using fresh eggs, using hot (not boiling water) to cook the eggs, by plunging eggs into ice water immediately after cooking, and by promptly removing the shells. 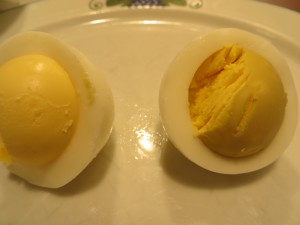 If you’ve heard of candling eggs, it involves shining a strong light through a raw egg to look at yolk position, air sac size and white clarity. You can also tell that an egg is older if it floats in water, due to the enlarged air sac.

Ideally, to cook perfect hard boiled (large) eggs, you put them in cold water, bring the water to a boil, remove the heat and let the pan stand with the lid on for 17 minutes before removing the eggs and plunging them into cold water. Alternately, boil large eggs for eleven minutes and put them in ice water to stop the cooking. For perfect eggs, prick the large end of your eggs with a pin to release the air in the air sac.

Move over, red meat.  High Fructose Corn Syrup (HFCS) is the new bad boy of the food industry.  Although companies like Hunt’s, Gatorade and Pepsi are rushing to replace HFCS with sugar, it’s ubiquitous in our nation’s food supply.   Not only was there a recent report of mercury contamination in HFCS, but in February, a study came out of Princeton University suggesting that rats fed HFCS for 6 months gained more weight, had more body fat and showed higher triglycerides than rats fed the same amount of table sugar (sucrose.)  A flurry of debate, fueled in part by the corn syrup industry, followed, calling into question the significance and accuracy of the study.  In the meantime, Michael Pollan’s book “The Omnivore’s Dilemma,”  and films like “Food Inc.” and “King Corn” accuse the corn industry of practically force-feeding Americans corn products.

I’ve been skeptical about all the negative press that High Fructose Corn Syrup is getting.  As I recall from my biochemistry class, all sugars are broken down into their simplest forms so the body can use them for energy.  They can be used immediately,  or stored for later use either as fat, or as a carbohydrate called glycogen.

The Princeton researchers think the unbound fructose in HFCS  is more likely to be stored as fat than the bound fructose molecules in sucrose.  They may be on to something.

It makes sense that sucrose and HFCS would be processed, or metabolized, differently.  Our body has to do some work to break apart the glucose and fructose in sugar, while the fructose in HFCS is instantly available to our metabolic machinery.  For thousands of years, our  bodies have evolved to break down plants, whole grains and meat to power our cells.  Now, we’re essentially shoveling pure energy down our throats in the form of HFCS, white flour and other processed foods.  I don’t think it will be long before researchers have more concrete evidence that corn syrup is not equivalent to sugar in the human diet.

I’m not going to knock myself out avoiding foods containing HFCS, but as a mom and a label reader, I will definately choose products sweetened with sugar.  Call it a gut feeling.

Happy Earth Day!  This weekend, we planted a garden.  Few things make me happier than watching my kids digging in the dirt, planting things.  Maybe it’s because I come from a long line of farmers, or maybe it’s the sun-warmed, homegrown tomato I can almost taste just by thinking about it.

One of the most interesting books I’ve read recently is Michael Pollan’s “Omnivore’s Dilemma,” which follows four meals from field to table (from McDonald’s to foraging for mushrooms and hunting a wild boar.)  It reminds the reader of how disconnected we have become from the sources of our food.  One of my favorite parts of the book talks about Joel Saletin, who is a seminal figure in the sustainable agriculture movement and probably the most famous farmer in America.  His bio on the FRESH movie website says:

“Joel calls himself a grass-farmer, for it is the grass that transforms the sun into energy that his animals can then feed on. By closely observing nature, Joel created a rotational grazing system that not only allows the land to heal but also allows the animals to behave the way the were meant to – as in expressing their “chicken-ness” or “pig-ness”, as Joel would say.”

This week, Joel is in town with Ana Joanes, who has made a documentary called “FRESH” that celebrates the farmers, thinkers and business people across America who are re-inventing our food system.  It’s about food, but it’s also about economics, community and social justice. Last weekend, I was lucky enough to meet both Ana and Joel while volunteering at one of Joel’s lectures and was impressed with their optimism and sense of humor.  Ana recently told planetgreen.discovery.com “I just had a little girl. Her name is Maayan. And, as clichéd as it may sound, I just want to do right by her. I don’t know what reality she’ll face when she reaches adulthood, but I’m trying my best so she doesn’t have to pick up the pieces of our recklessness and inaction.”

I saw FRESH last night in Minneapolis and loved it! The movie is just 70 minutes long, but you will want to talk about it for two hours afterwards!  Tonight’s the last night it’s showing,  so if you’re in the Twin Cities, don’t miss it!  You can order tickets here.

The movie brings up interesting points about monocultures, antibiotic resistance, high fructose corn syrup, the corn industry (which my grandparents’ farm in Iowa is a part of,) and beneficial bacteria.   I’m planning to explore many of these issues on this blog by writing a weekly post about food science between science experiments!  Stay tuned!