You can make colorful columns that demonstrate the concept of liquid density at your own kitchen table with just water, sugar and food coloring.  An eyedropper, siphoning bulb, syringe (minus a needle,) or anything else that allows you to slowly drip liquid from one cup to another are useful for the layering step.  If you have a tall, thin glass, like a cordial glass, or a test tube, it’s easy to see the layers in your gradient! 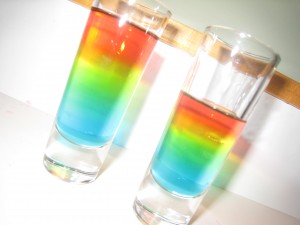 Density is mass (how many atoms are in an object) divided by volume (how much space an object takes up.)  Sugar molecules are made up of lots of atoms stuck together.  The more sugar you add to a half cup of water, the more atoms it will contain and the denser it will be. Less dense liquids float to the top of more dense liquids.  Which of your sugar solutions is the most dense? The one with the most sugar in it (8 Tbs.) 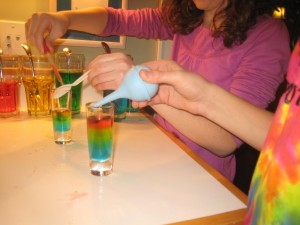 Put the most dense sugar solution(blue in this case)  in the bottom of a tall, thin glass or test tube.  Now, use your dropper to gently drip the next densest liquid (green) on top of the blue layer.  It works best to drip the sugar solution against the side of the cup just above the surface of the liquid.  You can also drip it onto the back of a spoon, like in the photo above.  Add the yellow layer, and finally the red layer, which only contains 2Tbs sugar per half cup and is the least dense.

What happens if you mix the layers up? They won’t separate back out like oil and water would, because the sugar will disperse (spread) equally through the mixture.

Move over, red meat.  High Fructose Corn Syrup (HFCS) is the new bad boy of the food industry.  Although companies like Hunt’s, Gatorade and Pepsi are rushing to replace HFCS with sugar, it’s ubiquitous in our nation’s food supply.   Not only was there a recent report of mercury contamination in HFCS, but in February, a study came out of Princeton University suggesting that rats fed HFCS for 6 months gained more weight, had more body fat and showed higher triglycerides than rats fed the same amount of table sugar (sucrose.)  A flurry of debate, fueled in part by the corn syrup industry, followed, calling into question the significance and accuracy of the study.  In the meantime, Michael Pollan’s book “The Omnivore’s Dilemma,”  and films like “Food Inc.” and “King Corn” accuse the corn industry of practically force-feeding Americans corn products.

I’ve been skeptical about all the negative press that High Fructose Corn Syrup is getting.  As I recall from my biochemistry class, all sugars are broken down into their simplest forms so the body can use them for energy.  They can be used immediately,  or stored for later use either as fat, or as a carbohydrate called glycogen.

The Princeton researchers think the unbound fructose in HFCS  is more likely to be stored as fat than the bound fructose molecules in sucrose.  They may be on to something.

It makes sense that sucrose and HFCS would be processed, or metabolized, differently.  Our body has to do some work to break apart the glucose and fructose in sugar, while the fructose in HFCS is instantly available to our metabolic machinery.  For thousands of years, our  bodies have evolved to break down plants, whole grains and meat to power our cells.  Now, we’re essentially shoveling pure energy down our throats in the form of HFCS, white flour and other processed foods.  I don’t think it will be long before researchers have more concrete evidence that corn syrup is not equivalent to sugar in the human diet.

I’m not going to knock myself out avoiding foods containing HFCS, but as a mom and a label reader, I will definately choose products sweetened with sugar.  Call it a gut feeling.