Handwashing is the best way to kill influenza and corona viruses, but it’s easy to make your own hand sanitzer for those times when you can’t get to a sink.

To make sanitizer, you’ll need 91% or 99% rubbing alcohol (isopropanol) and the kind of aloe vera gel used for sunburn treatment, which may have a little bit of water and alcohol mixed in already. Both are available over the counter at most stores.

As I wrote this post, Minnesota went from orange to red on the Center for Disease Control’s FluView map. Click here to see how active viral influenza is in your area.

This season’s manifestation of the flu (H3N2) is currently burning it’s way though the Twin Cities, sending droves of tough Minnesotans coughing and shivering to their beds. Five people have already died from the flu, two of them teenagers.  Stomach bugs, caused by other viruses, are making their rounds too, but when health care workers and scientists talk about flu, they’re talking about viral influenza.

How can a shot help prevent a horrible case of the flu and why do you need a new one every year?  Can you avoid the flu by washing your hands?

It helps to understand a little bit about the influenza virus.  Like I tell my nursing students: know your enemy and you’ll have a better chance of outsmarting it!

Viruses are too small to see under a microscope.

Viruses are tiny packages of genetic material (DNA or RNA) that can infect every type of life on Earth, from bacteria to humans.  They’re not considered living, because they can’t make new copies of themselves outside their host organism.  In fact, to replicate themselves, they have to hijack their host’s cellular machinery.  Essentially, viruses are extremely tiny parasites, so small you can’t even see them under a microscope.

To cause an infection and make you sick, the influenza virus has to get into your cells, use your cells to make lots of new copies of itself, and then escape from those cells so the new viral particles can go out and infect other cells. 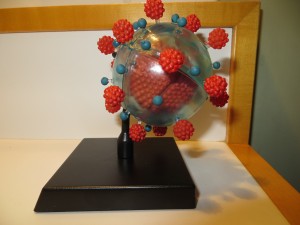 Protein “spikes” on the surface of the influenza virus, called hemagglulutinin and neuraminidase are used by the virus to enter and exit host cells.

The influenza virus is made up of eight segments of RNA, surrounded by a protein coat and an envelope. Two types of protein “spikes” that jut out of the viral envelope are called hemagglutinin and neuraminidase.  Hemagglutinin (H) helps the influenza virus attach to host cells, and neuraminidase (N)  helps burst the host cell open so the new viral particles can escape.  Flu strains are names for these proteins, which is why you see influenza called H1N1, and so on.

These H and N proteins undergo small changes all the time.  Each year, health workers and scientists study flu strains around the world by looking at their H and N proteins, among other things.  If one of the proteins has changed a little bit, they will give it a new strain name (like H3N2.)  Pharmaceutical companies make new vaccines every year so that your body can recognize the new strains with the new H and N proteins  to fight them off.

A flu shot primes your body’s immune system to fight the flu virus and get rid of it. How well the vaccine works each year depends on a number of thing, including how well scientists guessed about which strains would be circulating and whether those strains have undergone other changes.  How well your vaccine protects you personally depends on variables including what flu strain you’re exposed to, your age, whether you have another viral or bacterial infection at the same time, and even how strongly your individual immune system reacts.

What can you do to minimize your risk of getting sick with the flu?  Get your flu shot! Even if it doesn’t work perfectly, it will give your immune system a boost against the virus.  The flu is spread by coughing and sneezing and on surfaces like doorknobs and other surfaces. Try to stay away from people who are coughing. Wash your hands frequently and keep them away from your eyes, mouth and nose, which are portals of entry for microbes.  Eating right and getting enough sleep will bolster your immune system so that if you do get the flu, you may be able to fight it off faster and better.