Cover your cough and wash your hands! Later this week, we’ll post an experiment that illustrates how far the biggest drops from your sneeze or cough can travel. (The smaller ones can go much further.)

Here’s an amazing animation created by medical animator David Bolinsky and narrated by NPR’s Robert Krulwich that shows you how a flu virus can trick a single cell into making a million more viral particles that can go on to infect other cells, until your immune system stops them.

As I wrote this post, Minnesota went from orange to red on the Center for Disease Control’s FluView map. Click here to see how active viral influenza is in your area.

This season’s manifestation of the flu (H3N2) is currently burning it’s way though the Twin Cities, sending droves of tough Minnesotans coughing and shivering to their beds. Five people have already died from the flu, two of them teenagers.  Stomach bugs, caused by other viruses, are making their rounds too, but when health care workers and scientists talk about flu, they’re talking about viral influenza.

How can a shot help prevent a horrible case of the flu and why do you need a new one every year?  Can you avoid the flu by washing your hands?

It helps to understand a little bit about the influenza virus.  Like I tell my nursing students: know your enemy and you’ll have a better chance of outsmarting it! 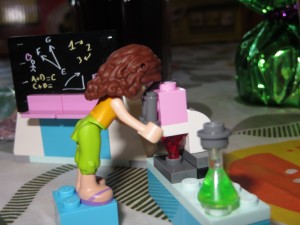 Viruses are too small to see under a microscope.

Viruses are tiny packages of genetic material (DNA or RNA) that can infect every type of life on Earth, from bacteria to humans.  They’re not considered living, because they can’t make new copies of themselves outside their host organism.  In fact, to replicate themselves, they have to hijack their host’s cellular machinery.  Essentially, viruses are extremely tiny parasites, so small you can’t even see them under a microscope.

To cause an infection and make you sick, the influenza virus has to get into your cells, use your cells to make lots of new copies of itself, and then escape from those cells so the new viral particles can go out and infect other cells.

Protein “spikes” on the surface of the influenza virus, called hemagglulutinin and neuraminidase are used by the virus to enter and exit host cells.

The influenza virus is made up of eight segments of RNA, surrounded by a protein coat and an envelope. Two types of protein “spikes” that jut out of the viral envelope are called hemagglutinin and neuraminidase.  Hemagglutinin (H) helps the influenza virus attach to host cells, and neuraminidase (N)  helps burst the host cell open so the new viral particles can escape.  Flu strains are names for these proteins, which is why you see influenza called H1N1, and so on.

These H and N proteins undergo small changes all the time.  Each year, health workers and scientists study flu strains around the world by looking at their H and N proteins, among other things.  If one of the proteins has changed a little bit, they will give it a new strain name (like H3N2.)  Pharmaceutical companies make new vaccines every year so that your body can recognize the new strains with the new H and N proteins  to fight them off.

A flu shot primes your body’s immune system to fight the flu virus and get rid of it. How well the vaccine works each year depends on a number of thing, including how well scientists guessed about which strains would be circulating and whether those strains have undergone other changes.  How well your vaccine protects you personally depends on variables including what flu strain you’re exposed to, your age, whether you have another viral or bacterial infection at the same time, and even how strongly your individual immune system reacts.

What can you do to minimize your risk of getting sick with the flu?  Get your flu shot! Even if it doesn’t work perfectly, it will give your immune system a boost against the virus.  The flu is spread by coughing and sneezing and on surfaces like doorknobs and other surfaces. Try to stay away from people who are coughing. Wash your hands frequently and keep them away from your eyes, mouth and nose, which are portals of entry for microbes.  Eating right and getting enough sleep will bolster your immune system so that if you do get the flu, you may be able to fight it off faster and better.

Flu season is in full swing and the Flu virus is everywhere.  Show your kids this amazing animation of how a virus can infect a cell! It links to youtube following the video, so be sure to supervise viewing for younger kids!

Recent testing indicates that American kids are lagging far behind in science. We spend hours reading with our kids, and helping them with math, but most parents don’t encourage science learning the same way.

We can teach our kids to love science before they even hit the classroom.  It can be as simple as watching a Planet Earth video instead of Nickelodeon, or taking your kids on a nature walk.

The experiments on this website are as simple as baking cookies and are calorie-free.  Try one!  Maybe you have a future scientist in your house and just don’t know it.

Tags: flu, science, video
In: The World Around Us | No comments »

“Infectious agents — whether viruses or microbes — are constantly testing their environment for new host species to survive.”  Beatrice Hahn, University of Alabama

Tiny organisms that can make us sick, known as microbes, are magicians at both changing and exchanging ways to survive in animal (and human) bodies.  We have get new flu shots each year because H. influenzae, the  flu virus, is constantly mutating.  Salmonella enteriditis bacteria, which can infect eggs have received “injections” of genetic information from other bacterial species, which  makes them more toxic to humans.  Bacteria mutate often and trade antibiotic resistance like kids trade Pokemon cards.

One trick that makes microbes especially dangerous to us is their ability to occasionally jump from animal to animal, or animal to human.  Our immune systems can often fight off infections that have been circulating through the human population over time, because we “recognize” the microbes trying to infect us.  However, when a microbe jumps from animal to human, our bodies often don’t have the ability to recognize it or fight it off. (Researchers speculate that the 1918 Flu virus that killed over 40 million people may have been passed from birds to pigs, and then to humans.)

It is often even easier for a microbe to jump to a closely related species, like from chimpanzee to human, since we are so similar.  To illustrate this idea, imagine a bacteria that usually infects circles.  Chances are, it would be more likely to recognize and infect an oval than to infect a square.  For a microbe to go from a chimpanzee to a human would be like going from circle to oval, while a jump from bird to human would be more like jumping from circle to square.

In the news this week, I learned that researchers have been racing to be the first to discover which of our primate relatives passed the parasite Plasmodium falciparum, which causes malaria,  to the human population. This race comes on the heels of a paper showing that H.I.V. probably originated in monkeys over 32,000 years ago before being passed to chimpanzees, and then on to humans. A scientist named Beatrice Hahn, from the University of Alabama, along with many collaborators, won the race and demonstrated that the malaria parasite jumped from western gorillas to humans in a single leap, probably between 5,000 and 300,000 years ago.

We don’t worry much about malaria in the United States, but P. falciparum is a killer.  According to the World Health Organization, or WHO ,”In 2008, there were 247 million cases of malaria and nearly one million deaths – mostly among children living in Africa. In Africa a child dies every 45 seconds of Malaria, the disease accounts for 20% of all childhood deaths.”   If malaria has been around for over 5,000 years, we can only imaging how many people it has killed.

Hopefully, these findings will allow researchers to compare the original parasite, found in gorillas, to the modified one, found in humans and discover new avenues for preventing and curing the disease it causes.  Maybe researchers will also gain more insight into how microbes jump from one animal to another, allowing us to prevent, or quickly halt diseases like malaria, H.I.V., or the 1928 flu before they become pandemics and kill millions of people.