Microbes are always fighting for space.

Bacteria and fungi try to outnumber other tiny competitors using chemical warfare, among other things.  That’s why many antibiotics (which kill certain bacteria) are actually produced by other bacteria. One reason foods like yogurt and cheese, which are made by beneficial bacteria like Lactobacillus acidopholis, don’t easily spoil is that these bacteria  can turn milk sugars into lactic acid. This makes their environment toxic to some of their competitors, like pathogenic bacteria.  Luckily, we humans aren’t harmed by lactic acid and can enjoy its tangy flavor. 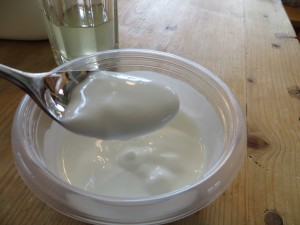 To grow bacteria in labs, scientists have to take care of them the way you’d take care of a pet.  You have to give them the type of food they like, the right amount of oxygen and moisture, and keep them at their optimal temperature.

The same principles apply to growing the bacteria that make yogurt.  You prepare the bacteria’s food by heating some milk and letting it cool to a temperature that the bacteria can tolerate. Then, you add the bacteria and let them grow for about eight hours.  During that time, the bacteria will happily divide, multiply and eat milk sugar. In the process, they’ll produce lots of lactic acid which changes the way the proteins and fats in the milk interact, forming a more solid food product. 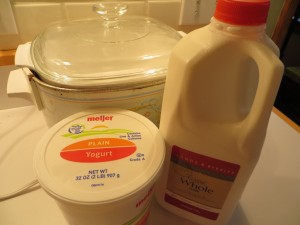 We made yogurt in our crock pot, which turned out to be a lovely bacterial incubator. The end product was a little runny, but putting it through cheese cloth (or a coffee filter in a plastic bag with the tip cut off) gives you thicker yogurt.  It is delicious!  Here’s how we made it, thanks to directions from Stephanie O’Dea: 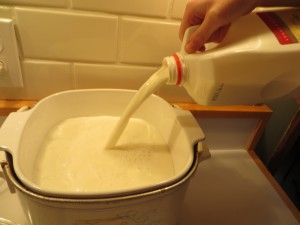 Turn crock pot on to low. Add an entire half gallon of milk. Cover and cook  for 2 hours and 30 minute. Unplug your crock pot, but leave the cover on. Let it sit for 3 hours so your bacteria will not be overheated when you add them. 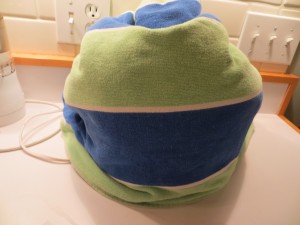 After 3 hours, put 2 cups of your warm milk  in a bowl. Whisk in 1/2 cup of the live/active culture yogurt. Dump the bowl contents back into the crock pot and stir well. Wrap a heavy bath towel all the way around the unplugged crock pot as insulation and let your bacteria grow for 4-8 hours or until thickened.  Refrigerate and enjoy with fruit, honey, or granola.  As I mentioned, you can strain the yogurt if you prefer a thicker consistency, and your homemade yogurt will make a great starter culture for the next batch! 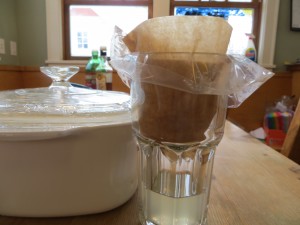 If you don’t have cheesecloth, you can strain your yogurt through a coffee filter in a plastic bag with a corner cut off.

Did you know that we have ten times more microbes in our bodies than human cells?  It may sound gross, but these microbes are often more friend than foe and keep us healthy  in return for a little space to call their own.

There was a fantastic article in yesterday’s Science Times about microbiomes- what scientists call the collection of microorganisms colonizing our bodies.  The study of microbiomes has intensified in recent years and scientists are trying to catalog some of the bacteria we carry.

I eat yogurt filled with healthy, or beneficial, bacteria on a daily basis to keep a healthy population of these little helpers living in my gut.  This keeps the bad bacteria from finding a place to take hold.  A more extreme version of this was mentioned in the Science Times article, where a woman dying of an intestinal infection caused by pathogenic, or bad bacteria was saved when bacteria from her husband’s intestines was introduced into her large intestine.  Within hours, the good bacteria had “kicked” the bad bacteria out, taking over residence.

I also learned that babies born by C-section (like my three kids) are more prone to skin infections and asthma, possibly due to the fact that coming from the sterile amniotic sac, they are colonized by bacteria from adults’ skin rather than that bacteria from their mother’s birth canal.  In fact, people with asthma have a different set of lung microbes than healthy people and obese people have a different set of bacteria in their guts than people of normal weight.

You’ve heard that kids on farms and are exposed to dirt have healthier immune systems than city kids?  It’s not the dirt itself, but the microbes in the dirt giving them their immune systems a boost.

There are years of hard work in the lab ahead of scientists to validate their beliefs that beneficial bacteria may one day be a weapon in the arsenal against infectious disease, but in the meantime, I plan to keep eating my yogurt and letting my kids play in the dirt.