Did you know that we have ten times more microbes in our bodies than human cells?  It may sound gross, but these microbes are often more friend than foe and keep us healthy  in return for a little space to call their own.

There was a fantastic article in yesterday’s Science Times about microbiomes- what scientists call the collection of microorganisms colonizing our bodies.  The study of microbiomes has intensified in recent years and scientists are trying to catalog some of the bacteria we carry.

I eat yogurt filled with healthy, or beneficial, bacteria on a daily basis to keep a healthy population of these little helpers living in my gut.  This keeps the bad bacteria from finding a place to take hold.  A more extreme version of this was mentioned in the Science Times article, where a woman dying of an intestinal infection caused by pathogenic, or bad bacteria was saved when bacteria from her husband’s intestines was introduced into her large intestine.  Within hours, the good bacteria had “kicked” the bad bacteria out, taking over residence.

I also learned that babies born by C-section (like my three kids) are more prone to skin infections and asthma, possibly due to the fact that coming from the sterile amniotic sac, they are colonized by bacteria from adults’ skin rather than that bacteria from their mother’s birth canal.  In fact, people with asthma have a different set of lung microbes than healthy people and obese people have a different set of bacteria in their guts than people of normal weight.

You’ve heard that kids on farms and are exposed to dirt have healthier immune systems than city kids?  It’s not the dirt itself, but the microbes in the dirt giving them their immune systems a boost.

There are years of hard work in the lab ahead of scientists to validate their beliefs that beneficial bacteria may one day be a weapon in the arsenal against infectious disease, but in the meantime, I plan to keep eating my yogurt and letting my kids play in the dirt. 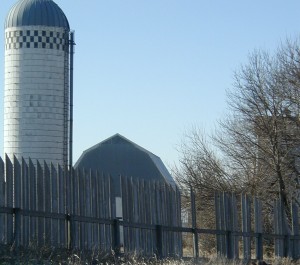