“When I wasn’t at school, I was experimenting at home, and became a bit of a Mad Scientist. I did hours of research on mayonnaise, for instance, and although no one seemed to care about it, I thought it was utterly fascinating. When the weather turned cold, the mayo suddenly became a terrible struggle, because the emulsion kept separating, and it wouldn’t behave when there was a change in the olive oil or the room temperature. I finally got the upper hand by going back to the beginning of the process, studying each step scientifically, and writing it all down. By the end of my research, I believe, I had written more on the subject of mayonnaise than anyone in history. I made so much mayonnaise that Paul and I could hardly bear to eat it anymore, and I took to dumping my test batches down the toilet. What a shame. But in this way I had finally discovered a foolproof recipe, which was a glory.” Julia Child, from My Life in France 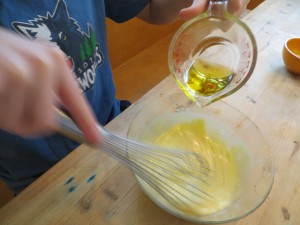 Julia’s secret for fool-proof mayo? Beat the mixture over a bowl of hot water to get the oil and eggs to form an emulsion, which is a mixture of two thing which are normally immiscible, like water and oil. In an emulsion, a bunch of one type of molecule will actually surround individuals or small groups of  the other type of molecule (think ring-around the rosy with one or two people in the middle who would rather not be there.)

When you’re trying to make an emulsion, it also helps to add a mediator called a surfactant to get between and interact with the immiscible molecules to stabilize the mixture. In a vinaigrette prepared using oil, mustard and vinegar, the proteins in the mustard act as surfactants. 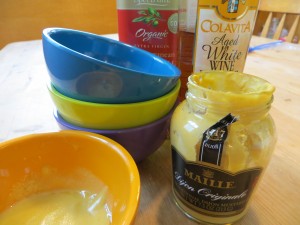 Try some variations on these kitchen experiments. Does it work better to use a cold egg, room temperature egg, or warm egg?  What happens if you try to make mayo by setting your mixing bowl in a bowl of ICE water? Do you get an emulsion? 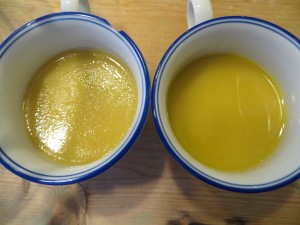 Can you see the difference between batches of vinaigrette? One was whipped over a bowl of ice water and the other over warm water. 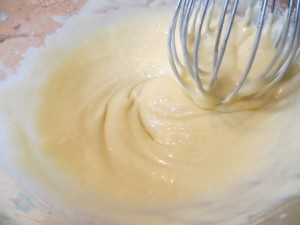 In a medium bowl, whisk together the egg yolk, lemon juice, mustard, salt and 1 teaspoon cold water until frothy. Whisking constantly, slowly dribble in the oil until mayonnaise is thick and oil is incorporated. When the mayonnaise emulsifies and starts to thicken, you can add the oil in a thin stream, instead of drop by drop.

*Remember that a bacteria called Salmonella enteriditis can lurk in raw eggs and make you sick, so it’s better to use pasteurized eggs for recipes like mayonnaise, where you don’t cook the eggs.