The word lever comes from the french verb “lever” which means “to raise.”  A lever amplifies force, so you can lift something heavier with a lever than you would be able to lift without a lever. Scientists think the ancient Egyptians used levers to lift huge stones. 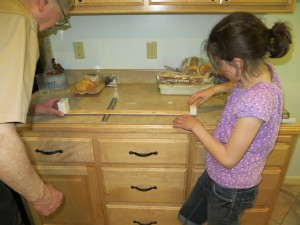 Levers are simple machines that require only a beam (a long piece of wood, metal or steel) and a fulcrum, the support on which a lever pivots.  It’s easy to make your own lever  using a can, a rag, a yardstick and some sticks of butter. We cut our sticks of butter in half, but you don’t have to.

The can is your fulcrum and you can keep it from rolling by placing it on a folded rag. Balance your yardstick (your beam) on the can. It’s nice  to do this experiment with a yardstick, since you can use the markings to find the halfway point. 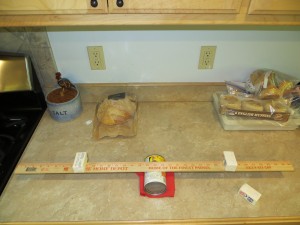 Place a stick of butter on either side of the ruler, halfway between the fulcrum (the can) and the end of the ruler.  Is it balanced?

Here’s the neat part.  Slide one of the sticks of butter all the way to the end of the ruler.  What happens? Put a second stick of butter on the stick of butter that you left in its original position. Now is it balanced?  You can move it a little if it’s not perfect, since it’s hard to get the can exactly in the center. 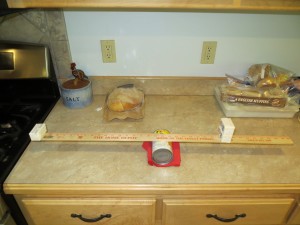 See how one stick of butter further from the fulcrum (the can) can easily hold the weight of two sticks of butter that are positioned closer to the can?  This demonstrates how a lever can help you lift something heavy.

What happens if you move the two sticks of butter even closer to the fulcrum? Can you add more butter and make it balance?

The mathematical expression for how a lever works is M=f times d. M is the turning force, or torque, f is the force you apply and d is the perpendicular distance between the force and the fulcrum. Basically, this “law of the lever” tells you exactly what you see: that the further you are from the fulcrom, the more weight you can lift using a lever.  (So one stick of butter at the end of a ruler can lift two or more sticks of butter on the other side of the fulcrum, depending on how far they are from the fulcrum.) You can also see why a longer lever might work better than a short lever.

The famous Greek mathematician Archimedes was also a physicist, engineer, inventor and astronomer, and he is credited with first explaining how levers work.  Later, in the renaissance, levers were classified as one of six simple machines, which can be combined with other simple machines and devices to form more complicated machines, like a bicycles. What levers can you think of on a bike?

I don’t have Archimedes to help me out with physics, but I’m lucky enough to have a dad who is physicist and came up with the idea for this project.  Not only is he my scientific consultant, but he’s the one who got me interested in science in the first place.