My sound experiment post will have to wait, because the video NASA is posting from the space shuttle Endeavour is too cool not to share! The video above is from day 2 of the mission as STS-134’s crew travels to the International Space Station.

The astronauts are hard at work, and one of the first things you’ll see is Astronaut Mark Kelly shaking up some plastic cylinders to start a microbiology experiment!!! At the NASA tweetup, we got to see one of these culture tubes close up! 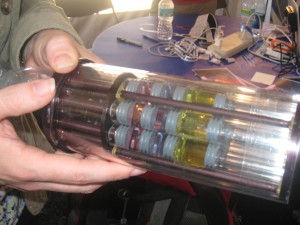 Today, NASA posted this great video of Endeavour “doing a final backflip before docking with the space station.”