You’ll have a blast learning physics by making water rockets!

While NASA’s rockets use rocket fuel as their working  mass, these rockets use water.  As pressurized air forces the water out of your rocket, the rocket moves in the opposite direction, just like Newton’s Third Law says it will. “For every action, there is an equal and opposite reaction.”

Although these rockets lack fins, a payload and a nose cone, you can see from this NASA illustration that they’re very similar to real rockets.  You can make a complicated launch pad like this, but we decided to make things easy.

For this experiment, you’ll need:

-an empty one or two liter bottle from a carbonated beverage

-a cork that has been cut in half and will fit in the mouth of your bottle  (An adult should do this. I used a serrated knife.)

-a needle for inflating balls

-a bike or ball pump

-a cardboard box cut to hold the bottle at an angle pointing away from you. This is your launch pad.

Push the needle through the cork so that it pokes out of the other side. Use the hole from the corkscrew to make it easier. 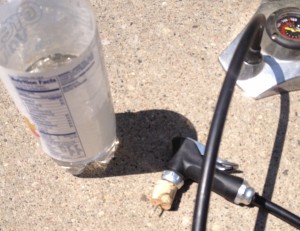 Needle should poke all the way through the cork.

Fill the bottle about 1/3 of the way full of water and insert the cork in the bottle.

Set the bottle in the cardboard box so that it’s pointing up, but away from you. See the photograph. 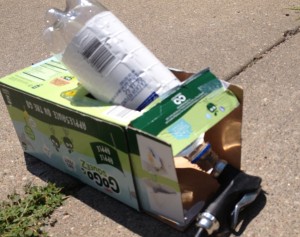 Attach the needle to the bike pump, stand behind the launch pad and start pumping air into the bottle.  The air pressure will build in the bubble at the top of the rocket. When the pressure gets high enough, it will force the cork and water out of the bottle with lots of force, and as the water shoots down, the rocket will shoot up!

What happens if you add more water, or less water to your rocket?

Can you imagine riding a real rocket? Check out Astronaut Abby’s website to meet a girl who wants to ride a rocket some day and ask an astronaut on the International Space Station questions! 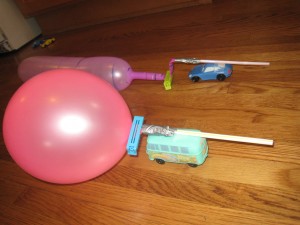 We use small chip clips to hold the air in until we're ready to rocket!

Similar technology is used to launch vehicles, like space shuttles, which are attached to a number of powerful rockets, burning rocket fuel. The rockets carry the shuttle into space as they’re pushed by the gases being “thrown” from them. Once outside the atmosphere, the space shuttles, or other space vehicles can maneuver through space, where there’s no air, by firing smaller rockets which push them in the opposite direction. Jet (turbine) engines and propellers don’t work in space, since they must push against air to work!

Don’t get frustrated if your rocket racer doesn’t work on the first try- it may take some work to get them going. Make sure the duct tape is tightly sealed against the straw, but isn’t mashing the straw, since the air must escape to push the car in the opposite direction! Engineers and scientists often have to work on designs for years to perfect them!