Earth Day is Tuesday, April 22nd. How will you celebrate the amazing planet that sustains us?  Here’s a link to ten fun Earth Day science experiments. Or, step outside, take a picture of yourself and post it on social media with the hashtag #GlobalSelfie for a new mosaic image of Earth being created by NASA: a new “Blue Marble” built bit by bit with your photos. 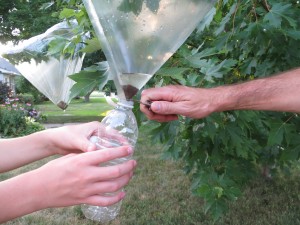 If you live in Minnesota, join me at the Science Museum of Minnesota Tuesday morning from 10-12 to celebrate Earth Day and NASA Climate Day with some games and a hands-on experiment for kids!

#SpaceMicrobes, including our own Minnesota microbe swabbed from the Kare11 television studio, have arrived safely on the International Space Station. Over the next few days, 48 microbes swabbed from sports stadiums and other cool locations will be thawed out and start to grow! Astronauts will measure their growth using a machine called a microplate reader, over a period of three days. The experiment will be repeated three times, and scientists will average the data and compare it to the data they’ve collected doing an identical experiment with the same microbes here on Earth! I talked about it on Kare11 the other day.
Finally, here’s a fun experiment we did with a water bottle and a laser pointer this weekend. Try it!

skullsinthestars.com has a detailed explanation of this amazing phenomenon!