What happens when food coloring molecules move, or DIFFUSE through gelatin, the substance that makes jello jiggle? 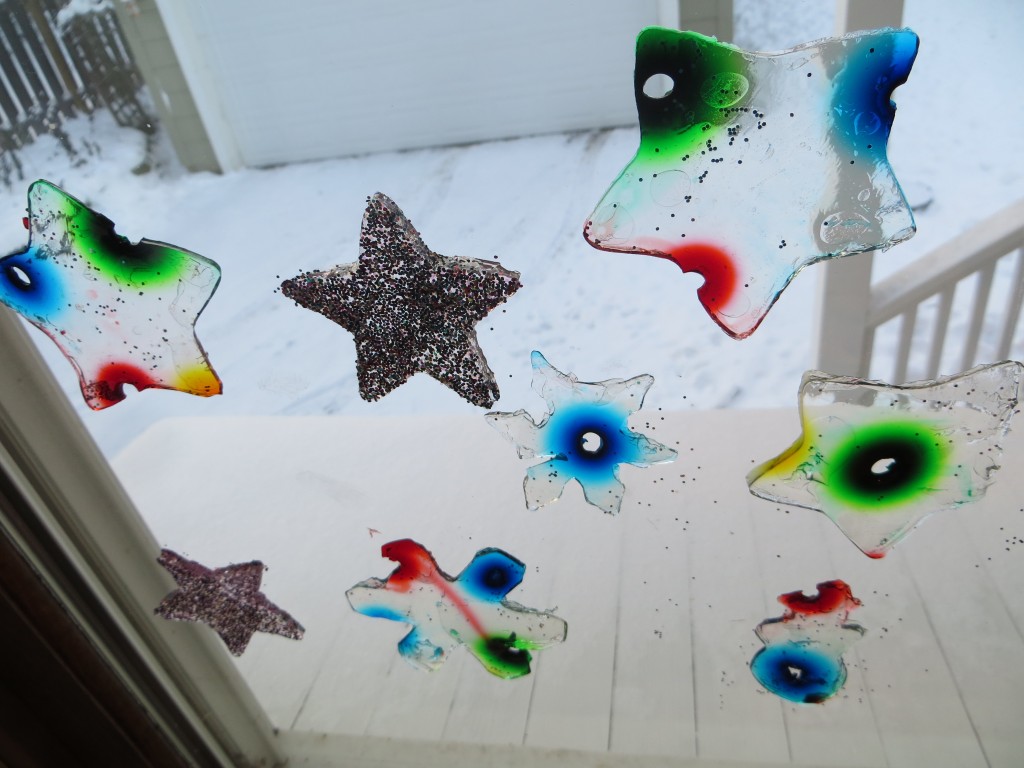 This creative science experiment that my kids and I invented lets you play with floatation physics by sprinkling glitter on melted gelatin, watch colorful dyes diffuse to create patterns and then use cookie cutters to punch out sticky window decorations.  Water will evaporate from the gelatin, leaving you with paper-thin “stained glass” shapes.

You can watch us making them on Kare11 Sunrise News by clicking here.

-plain, unflavored gelatin from the grocery store or Target

*You can use the recipe below for two pans around 8×12 inches, or use large, rimmed cookie sheets for your gelatin. For a single pan, cut the recipe in half.

Step 1. Add 6 packs of plain, unflavored gelatin (1 oz or 28 gm) to 4 cups of boiling water. Stir well until all the gelatin has dissolved and remove bubbles with a spoon.

Step 2. Allow gelatin to cool to a kid-safe temperature. Pour the liquid gelatin into two large pans so it’s around 1-1.5 cm deep. It doesn’t have to be exact.

Step 3. Sprinkle glitter on the gelatin in one pan.  What happens? 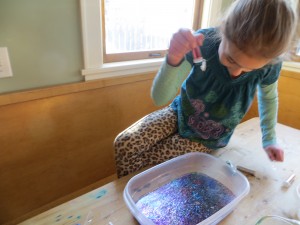 Step 4. Allow the gelatin to harden in both pans.

Step 5. In the pan with no glitter, use a straw to create holes in the gelatin, a few cm apart, scattered across the surface. It works best to poke a straw straight into the gelatin, but not all the way to the bottom. Spin the straw and remove it. Then, use a toothpick or skewer to pull out the gelatin plug you’ve created. This will leave a perfect hole for the food coloring. Very young children may need help.

Step 6. Add a drop of food coloring to each hole in the gelatin. 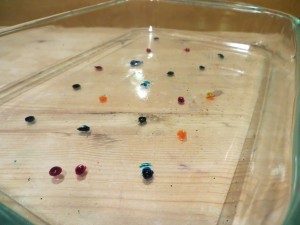 Step 7. Let the gelatin pans sit for 24 hours. Every so often, use a ruler to measure the circle of food coloring molecules as they diffuse (move) into the gelatin around them (read about diffusion at the bottom of this post.)  How many cm per hour is the color diffusing?  Do some colors diffuse faster than others? If you put one pan in the refrigerator and an identical one at room temperature, does the food coloring diffuse at the same rate?

Step 8. When the food coloring has made colorful circles in the gelatin, use cookie cutters to cut shapes from both pans of gelatin (glitter and food coloring), carefully remove them from the pan with a spatula or your fingers, and use them to decorate a window. (Ask a parent first, since some glitter may find its way to the floor!) Don’t get frustrated if they break, since you can stick them back together on the window.

Step 9. Observe your window jellies each day to see what happens when the water evaporates from the gelatin.

When they’re dry, peel them off the window. Are they thinner than when you started? Why? Can you re-hydrate them by soaking the dried shapes in water?

The Science Behind the Fun:

Imagine half a box filled with red balls and the other half filled with yellow ones.  If you set the box on something that vibrates, the balls will move around randomly, until the red and yellow balls are evenly mixed up.

Lots of things can affect how fast molecules diffuse, including temperature.  When molecules are heated up, they vibrate faster and move around faster, which helps them reach equilibrium more quickly than they would if it were cold. Diffusion takes place in gases like air, liquids like water, and even solids (semiconductors for computers are made by diffusing elements into one another.)

Why does glitter float on gelatin? An object’s density and it’s shape help determine its buoyancy, or whether it will float or sink. Density is an object’s mass (loosely defined as its weight) divided by its volume (how much space it takes up.) A famous scientist named Archimedes discovered that any floating object displaces its own weight of fluid. Boats have to be designed in shapes that will displace, or push, at least as much water as they weigh in order to float.

What is the shape of your glitter? Does it float or sink in the gelatin?

Credit: My 11 YO daughter came up with the brilliant idea to stick this experiment on windows. I was just going to dry out the gelatin shapes to make ornaments. Kids are often way more creative than adults! 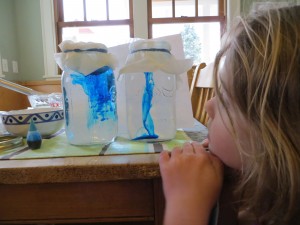 Diffusion is the name for the way molecules move from areas of high concentration, where there are lots of other similar molecules, to areas of low concentration, where there are fewer similar molecules. When the molecules are evenly spread throughout the space, it is called equilibrium. Imagine half a box filled with yellow balls and the other half filled with blue ones.  If you set the box on something that vibrates, the balls will start to move around randomly, until the blue and yellow balls are evenly mixed up.

Lots of things can affect how fast molecules diffuse, including temperature.  When molecules are heated up, they vibrate faster and move around faster, which helps them achieve equilibrium more quickly than they would if it were cold.

Diffusion takes place in gases (like air), liquids (like food coloring moving through water,) and even solids (semiconductors for computers are made by diffusing elements into one another.)

You can watch food coloring diffuse through a colloid (gelatin) at home and measure how long it takes. Gelatin is a good substance to use for diffusion experiments since it doesn’t support convection, which is another kind of movement in fluids. You’ll need clear gelatin (from the grocery store or Target), food coloring and water.

Add 4 packs of plain, unflavored gelatin (1 oz or 28 gm) to 4 cups of boiling water. Pour the liquid gelatin into petri dishes, cups, or tupperware and let it harden.  Then, using a straw, poke a hole or two in the gelatin, removing the plug so that you have a hole in the jello about 1/2 inch deep.  Add a drop of food coloring in the hole in the jello. 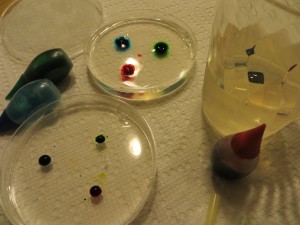 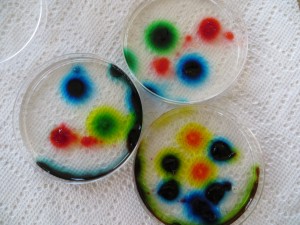 Every so often, measure the circle of food coloring as it diffuses into the jello around it.  How many cm per hour is it diffusing?  If you put one plate in the refrigerator and an identical one at room temperature, do they diffuse at the same rate?  Why do you think you see more than one color for certain shades of food coloring? What else could you try?

Here’s a post on how to use this experiment to make sticky window decorations: https://kitchenpantryscientist.com/?p=4489

You can see the pink circle from the vinegar and the green one from the baking soda solution.

It’s also fun to experiment with the diffusion of substances across a membrane, like a paper towel.  This is called osmosis. Membranes like the ones around your cells are selectively permeable and let water and oxygen in and out, but keep other, larger molecules from freely entering and exiting your cells.

For this experiment, you’ll need a jar (or two), paper towels, rubber bands and food coloring.  Fill a jar with water and secure a paper towel in the jar’s mouth (with a rubber band) so that it hangs down into the water, making a water-filled chamber that you can add food coloring to.  Put a few drops of food coloring into the chamber and see what happens.

Do the same experiment in side-by-side jars, but fill one with ice water and the other with hot  water.  Does this affect the rate of osmosis or how fast the food coloring molecules diffuse throughout the water?

Think about helium balloons.  If you take identical balloons and fill one with helium and the other with air, the helium balloon will shrink much faster as the smaller helium atoms diffuse out more quickly than the larger oxygen molecules.