My 8-YO loves Orbeez, those water-thirsty polymer balls that go from the size of cookie sprinkles to the size of marbles after a quick soak.

I wondered whether we could make something similar from gelatin or agar. 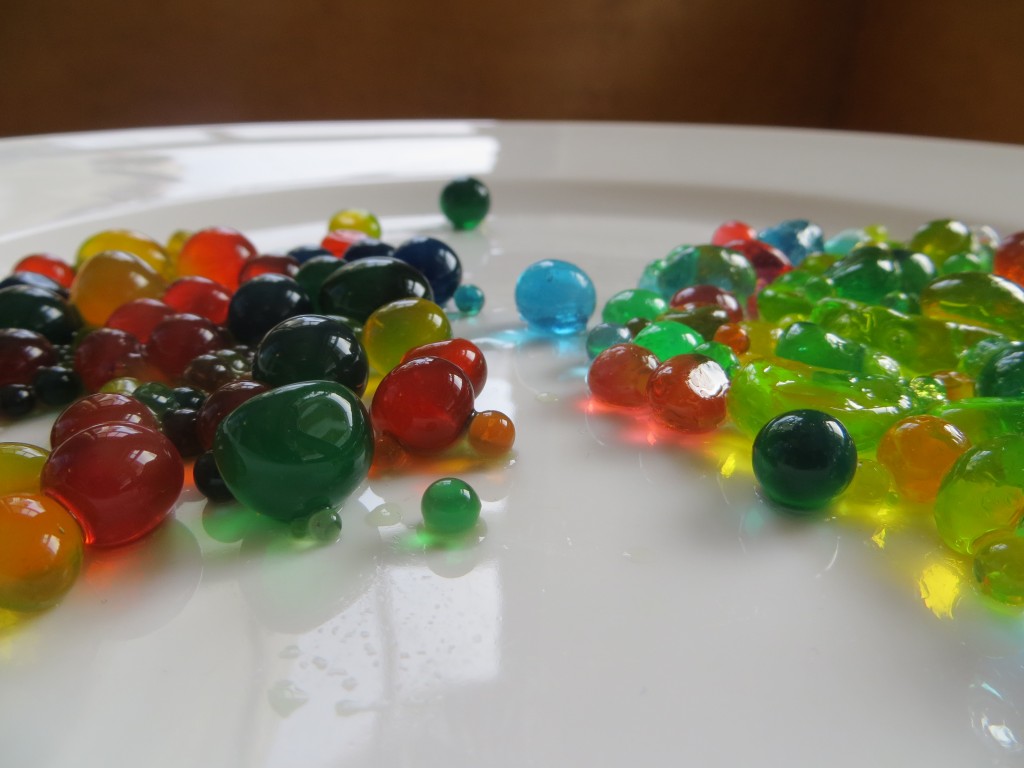 A quick search online showed me that some chefs use a technique called oil spherification to make tiny round morsels using everything from balsamic vinegar to fruit juice, mixed with gelatin and agar.  It’s known to cooks as a “molecular gastronomy” technique, and takes advantage of the fact that water and oil don’t mix. Water-based droplets falling through chilled oil form  into perfect spheres due to surface tension, and gelatin and agar added to the mix are colloids that solidify as they cool. 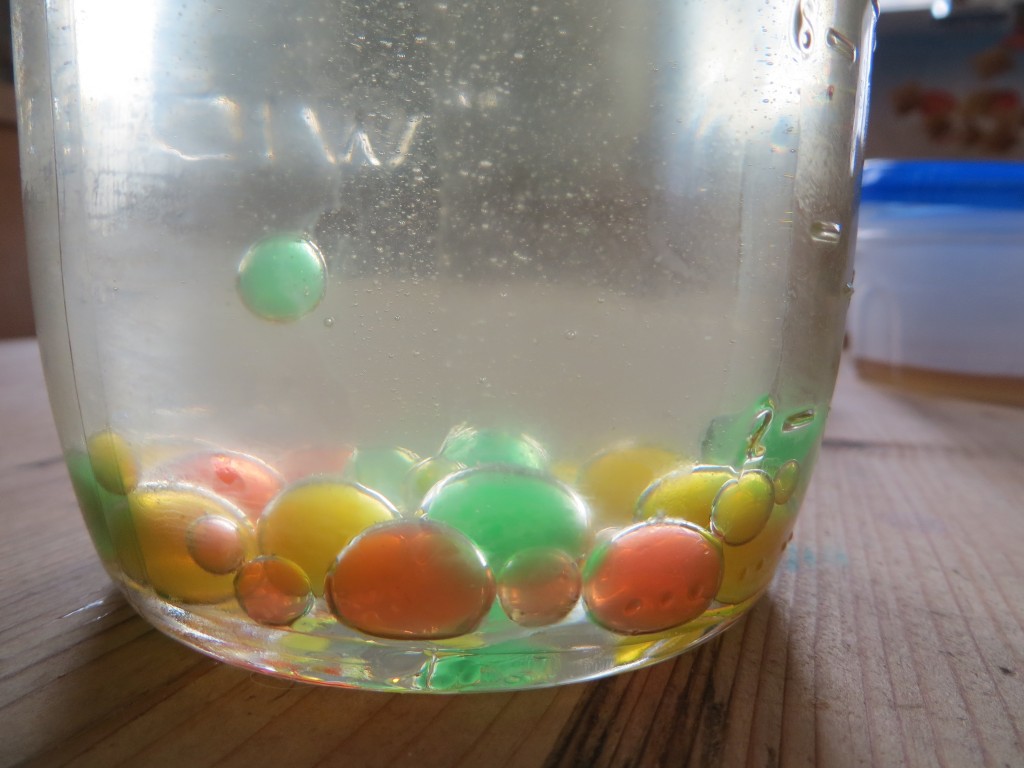 We made some fun (inedible) orbs of our own, using the technique: standard orbs (from gelatin or agar and water), floating orbs (with agar and vinegar) and color-changing acid/base indicator orbs (from red cabbage juice and gelatin or agar.) Adult supervision is required for this project, since it involves hot liquids. The orbs may also be a choking hazard, so keep them away from toddlers. I demonstrated how to make them on Kare11 Sunrise News.

-cold vegetable oil in a tall container. Chill oil in freezer or on ice for at least an hour, or until it is cloudy, but still liquid.

HINT: Orbs made with vinegar and agar shrink better than those made with gelatin (see floating orb recipe below!)

2. Pour into smaller containers and add food coloring. When cooler, but not solid, add the melted, colored gelatin or agar to an empty glue container or squeeze bottle.

3. Drip gelatin or agar solution into the cold oil, a few drops at a time so it forms into marble-sized orbs and sinks. Drip two colors together to make multi-colored orbs! Allow to cool for 30 seconds or so and retrieve with a slotted spoon or strainer. Rinse with water and repeat, re-chilling the oil as needed until you have as many orbs as you want. 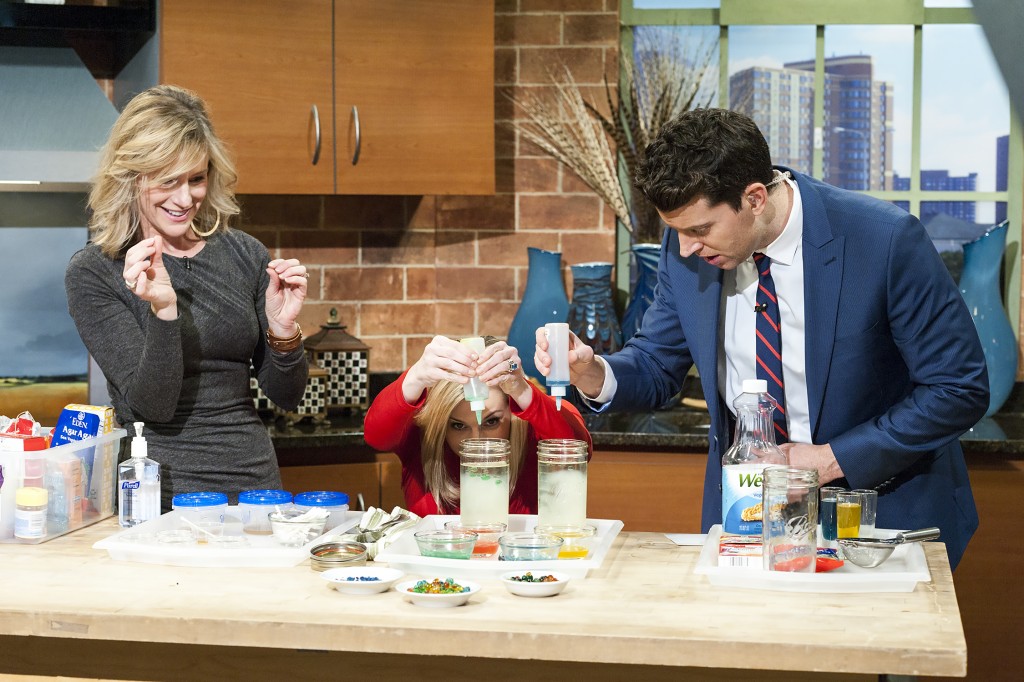 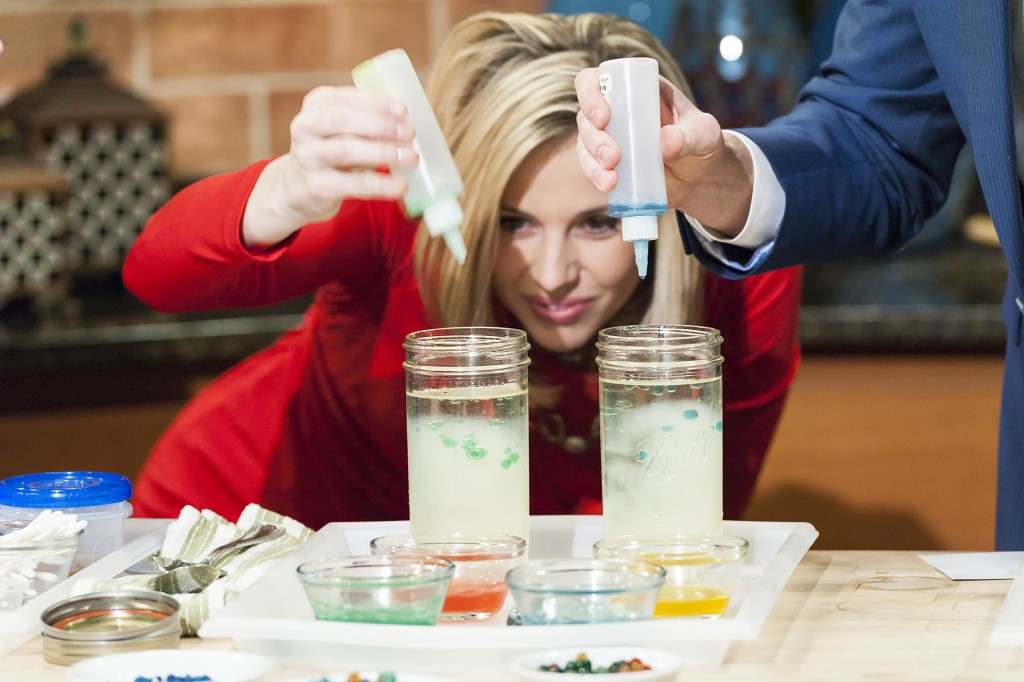 4. Rinse orbs with water. Dry them out by setting them on a plate overnight if you want to see them shrink and then re-hydrate them with water. Orbs can be kept in a plastic bag in the refrigerator. (Keep away from small children, since they may be a choking hazard.)

To make floating orbs, follow directions above, but make with 1 cup white vinegar and 2 Tbs. agar. They will sink and float when added to water with a few tsp. of baking soda mixed in as the vinegar and baking soda react to form carbon dioxide gas. 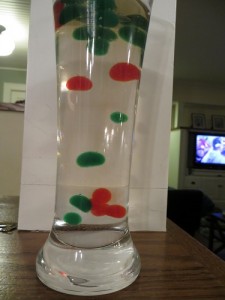 To make color-changing orbs, dissolve 2 Tbs. agar or 5 packs unflavored gelatin in 1 cup red cabbage juice (magic potion) and follow directions for making orbs. Then drop them in vinegar to watch them turn pink or in water containing baking soda to watch them turn blue! 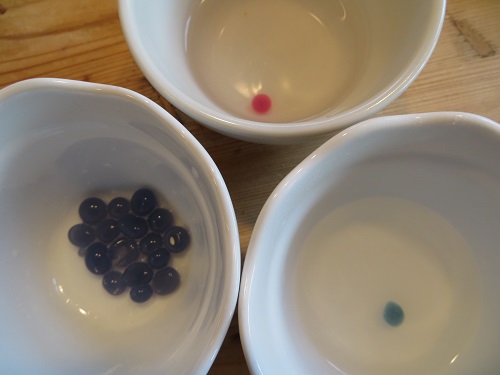 *Agar, or agar agar flakes can be found in the Asian food section of many grocery stores!