As a kid, I was always fascinated by stories of pieces of straw from a field being driven into  wooden planks in barns and houses by the swirling winds. 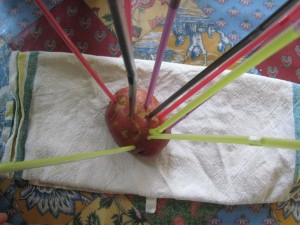 With a potato, plastic drinking straws and a glass of water, you can see for yourself how this happens.  Like drinking straws, real straw is hollow and although a potato is much softer than a piece of wood, you’ll get the picture.

You’ll need a potato and some sturdy plastic drinking straws.

Begin by soaking a potato in a glass of water for about 30 minutes to soften the skin.  We used a red, boiling potato, because that’s what I had on hand.

Then, grasp a straw tightly, near the middle and stab it into the potato as hard as you can. Try starting at different distances from the potato to see whether it makes a difference in how far the straw goes in. (You can mark it with a Sharpie and pull it out.)

We were surprised to find that, instead of breaking or bending, the straw can be driven surprisingly deep into a potato .  This happens because objects in motion, like the straw, tend to stay in motion and objects at rest, like the potato, tend to stay at rest.  (Newton’s First Law of Motion) This is called inertia.  In addition, the paper-thin edges of a drinking straw don’t offer much resistance, and potatoes are composed of around 90% water.