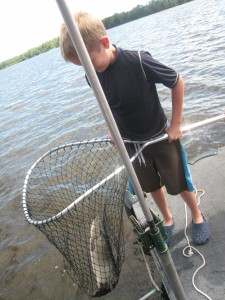 “Mom!  I caught a big Northern!”  my son screamed at me.  I ran to get the net, excited that he’d finally hooked a big one, right off our dock.

When I got the net around the fighting fish though, I was sure it wasn’t a Northern Pike.  We took pictures of the huge, gray creature and were lucky enough to have it wriggle off the hook before we donned gloves to try to get it off ourselves.  I guessed that it was a bowfin, based on the long fin running down its back and a neighbor’s report of catching one on the same lake.  We confirmed it online when we got home.

Along with gar and sturgeons, bowfin are in an order of primitive, ray-fin fish that have survived since the time of the dinosaurs.  They can grow to 43 inches and weigh up to 21 pounds.  My son’s weighed between 5 and 10 pounds and I’m glad we didn’t have him try to hold it up for a photo, since bowfin have very sharp teeth and will bite anyone who attempts to handle them.  We released the fish and watched him disappear  into the deep.

The kids were a little afraid to swim off the dock after that.  I don’t blame them.  Who wants to go swimming in the lair of a prehistoric monster?

Tags: bowfin, kids, prehistoric, science
In: The World Around Us | No comments »