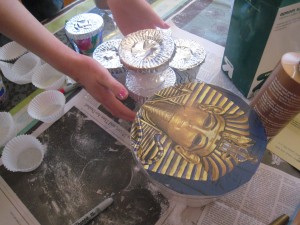 We had an amazing time at the  King Tut exhibit at the Science Museum of Minnesota and the omnitheater film Mummies, Secrets of the Pharaohs, gave us a fascinating look into the rituals of mummification.

We learned that Natron, which was used in Ancient Egypt to preserve mummies,  is a natural salt mixture containing sodium carbonate  decahydrate (soda ash), sodium bicarbonate (baking soda), sodium chloride (table salt), and another salt called sodium sulfate.  Salt is a dessicant, which is a chemical that removes water from things.  It also has anti-microbial properties, which means it kills bacteria and fungi.  When you remove water and microbes from the picture, mummies bodies’ don’t decompose.

I read that you could use different combinations of table salt, Epsom salts and baking soda to try to replicate Natron and mummify apples, so we tried it out…Here’s a demonstration we did on Kare 11.

First, we decorated some of our plastic cups with Markers, since every mummy should have a fancy sarcophagus (even an apple).  Then, we labeled them as follows: 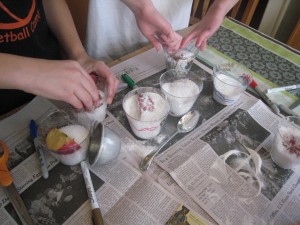 We cut an apple into 8 equal pieces and added one to each cup, covering them with the appropriate salt mixture and adding a loose top to the cups (we used foil cupcake holders.)  We let them sit for a week and exhumed them to see what happened.  It was amazing how different each apple looked, and how much liquid was in some of the cups!  After we checked them out, we returned them to the cups with some dry salt mixture to let them go for another week! 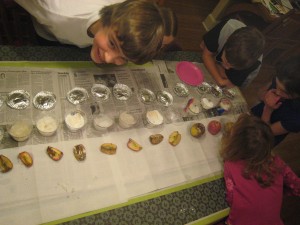 The Egyptians would dry their mummies with Natron in windy tents in the dry desert air for40 days before wrapping them for their final burial.

You can weigh your apples before drying them to see how much water they lose!  We tried the experiment with whole apples too, peeling and coring one, coring another and leaving one intact before covering them with salt mixture.  We even wrapped on in cloth strips, just for fun! 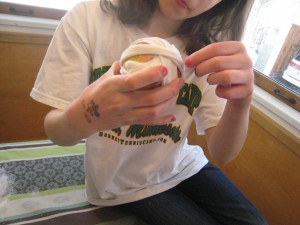 What keeps mold from growing?  What preserves the apple’s color best?  Which salt mixture keeps the apples from smelling bad?

Click here to cancel reply.
« Face to Face with Pharaohs at the Science Museum of Minnesota
Marshmallow Slingshots and Transformation of Energy »