Although I don’t usually do product reviews, when Steve Spangler Science asked me to try out  Larry’s Polymer Lab, I couldn’t resist. I’d seen some of Steve’s Halloween Science Demonstrations online and guessed that his kit would probably be both fun and educational.

When the package arrived, we unwrapped a clear paint can filled with 5 different polymer substances in smaller containers (and a big lizard named Larry.) The kids couldn’t wait to get started.

The only polymer we’d played with before was “Mad Scientist’s Green Slime,” made with glue, water and Borax. The kids know that polymers are long chains of molecules, like beads on a string, but Larry’s Polymer Lab’s instruction manual told us that the polymers we were about to play with were super-absorbant and could soak up mind-boggling amounts of water. We put down some newspaper on our kitchen table and opened the can. 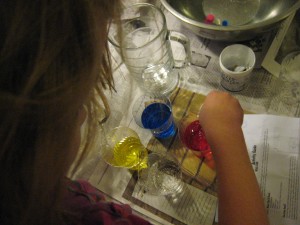 As we experimented, the words “awesome” and “feels cool” were uttered repeatedly.

As a note, the polymers we experimented with are considered safe, but I would not use the marble-like ones with small children, since they look like candy and are choking hazards. My 11,9 and 5 year olds were perfect ages for the kit.

First, we tried the Water Gel. “When you add water to this superabsorbent polymer, it instantly turns from a liquid to a slushy solid.”  The kids were impressed as the water seemed to magically solidify, and it was a good way for them to practice measuring!

Next, came Jelly Marbles, “tiny 3 mm spheres that, when soaked in water, grow into 20 mm water-filled marbles.” The kids loved these and the color component of the experiment adds some fun variations to play with. We want to try growing plants in them!

The Gravi-Goo, “fascinating goo that finds a way to flows uphill,” was neat, but really hard to clean up. My kids always find a way to spill.

Giant Orbs, “gooey bouncing balls turn into massive, colorful spheres after soaking in water” were our favorite! They grow up to 11 times their own size in water over 6 or so hours and the kids played with them for days, checking them every time they came into the kitchen.

We’ve tried “Insta-Snow” before, but the snow-like polymer in this kit worked spectacularly well. My 5-year old asked for more of it for Christmas, not realizing that we still have a ton left over.

At $44.99, the kit seems a little pricey, but it contains enough of each polymer (at least 50 giant orbs and hundreds of jelly marbles) to do the experiments over and over again, use them for a birthday party, or even a classroom science project or party. I’ve started doing science experiments at my kids’ school holiday parties as a change from the usual arts and crafts. Many of the polymers also have a number of suggested variations on the basic experiments.

As I type, Larry the lizard is soaking in a bucket of water. What I thought was just a plastic lizard is actually made of water-absorbing polymer and will grow into a giant, slimy chameleon. What could be better than that?

The kit was sent to me free of charge, but I wasn’t paid to review it. The kids and I give it two thumbs up.