Gallium is a soft metal related to other metals in Group 13 of the periodic table, including aluminum. It doesn’t exist as a free element in nature, but can be purified from other metallic ores, like zinc. Each gallium atom has 31 protons in its nucleus, so its atomic number is 31.

You’ll find it around you in thermometers, semiconductors, and even some LED lights, and one property that makes it so cool is that it melts from solid to liquid at low temperatures (around 85.6 degrees F or 29.8 degrees C.) This makes it easy to play with the liquid metal simply by melting it in a glass of hot water, or in the palm of your hand. 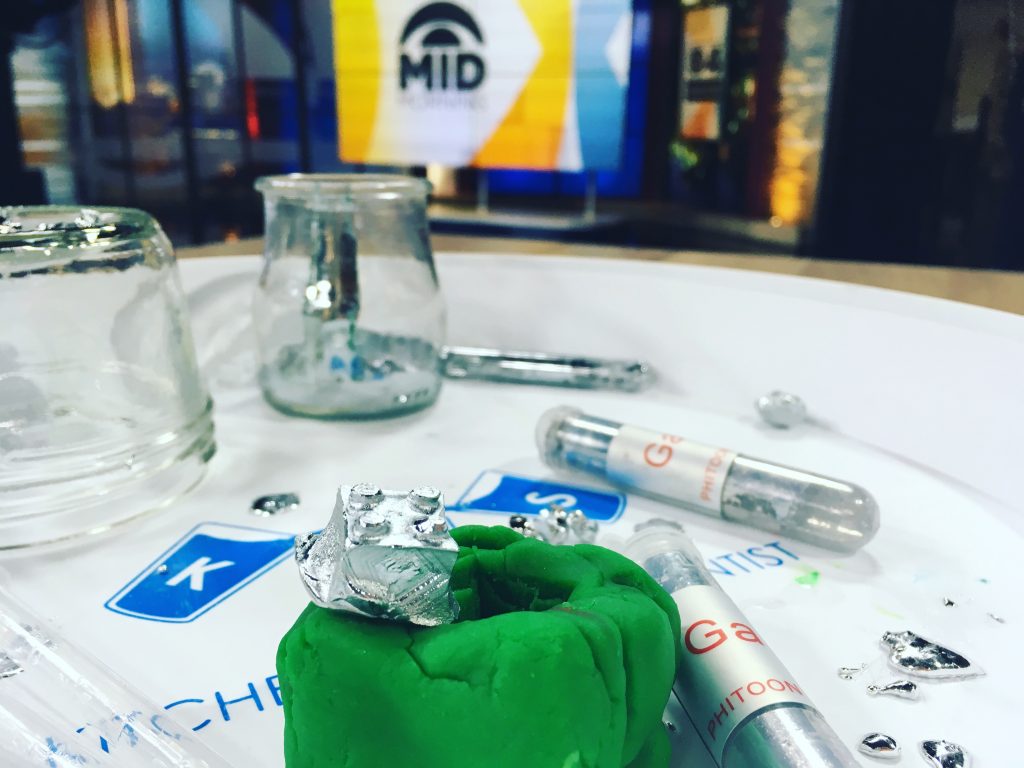 You can see the crystal structure in the side of the gallium “Lego” we created in play dough! KitchenPantryScientist.com

*Not for small children! Wearing gloves and safety goggles is recommended when observing gallium. Although is is fairly safe, gallium will coat hands with a lead-like substance. (Wash with soap and water to remove.) Gallium can also damage other metals, so keep it away from jewelry, like rings. I always recommend doing your research, as well as checking out the MSDS (Material Data Safety Sheet) of a new substance before using it to know what precautions to take.

We ordered 99.99% pure gallium on Amazon. It arrived in plastic tubes,in crystal form, but by placing the tubes in hot tap water, it melted easily. Eye droppers work well for moving the melted metal around. I’d recommend using a rimmed paper plate to contain the mess.

Try imprinting a Lego or toy car in play dough and pouring the molten gallium into the imprint. When it solidifies, you’ll have a cast of the item you imprinted! (It takes a while.) Gallium coats glass to create mirrored surfaces, so you can pour some into a small jar and use it to coat the sides. If you leave some in a puddle on the bottom of an upside-down jar, you can watch crystals form.

In other words, it’s pretty awesome!