A recent trip to Kennedy Space Center made me feel like a kid again and I’m reveling in a momentary lapse of cynicism. Please excuse me if I sound cheesy, or over the top, but I haven’t come back down to earth quite yet.

The United States is is a young nation.  We have not been afraid to explore, and our boldness led us to take humankind’s first steps on the moon.

Naturally, our curiosity has led us to some dead ends and we’ve taken a few tumbles, but through basic scientific exploration and hard work we have stumbled upon a wealth of information that has made each of our lives better.

Even while being robbed of our innocence, our country has managed to hold strong to the ideals of freedom and equality.  Sadly, our childlike wonder has not been so lucky and is in danger of becoming a casualty of the aging process.  Gravity pulls us down each time we cut funding to scientific research.  It doesn’t hurt much yet, but could bring us to our knees.

At Kennedy Space Center the last week of April, I attended  a “tweetup” sponsored by NASA for 150 of it’s Twitter followers. There to witness the launch of space shuttle Endeavour, we were given behind-the-scenes tours at NASA and listened to a number of astronauts, scientists, engineers, and technicians speak about working for the space program. Their passion and conviction for what they do was the most patriotic expression I’ve ever witnessed.  The message I heard over and over again was the mantra of the American dream.

“Work hard in school and you can be whatever you want to be.” (Maybe even an astronaut.)

“The best stuff is still in front of us.”

“When we stop exploring we will falter.”

NASA is not about astronauts sitting around eating freeze-dried ice cream.  It is about exploration and science.  It is about “revealing the unknown about the planet on which we live” and learning about our place in the universe. The astronauts on the space station are conducting experiments which will yield better vaccines and cancer treatments, among other things.  They’re gleaning priceless information about our home planet that we simply can’t capture with our feet on the ground.

Of course it is important for us to be fiscally responsible as a nation, but we can’t lose our childlike wonder or we will lose what sets us apart from the rest of the world.  We will fail to thrive when we fail to explore and make new discoveries. NASA embodies the American spirit of exploration and symbolizes what makes us so great as a nation.

As NASA’s chief scientist Waleed Abdalati said, there is a “brilliant future ahead that is ours for the creating.”

Tags: minnesota, nasa, tweetup
In: The World Around Us | 1 comment »

We waved and screamed as the Astrovan (carrying the astronaut crew to the shuttle Endeavour) drove past our NASA Tweetup group yesterday.  Moments later, our hearts fell when we witnessed the first-ever Astrovan turn-around as the launch was “scrubbed”, or delayed, and the astronauts headed back to quarantine to wait for the next launch attempt. Putting on brave smiles, we trudged back to our tent.  Everyone was sad, but one thing we learned at the tweetup is that NASA always puts safety first, and for good reason. 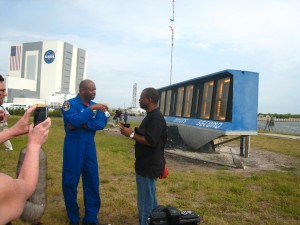 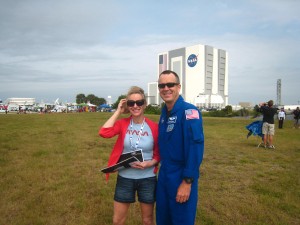 Astronauts.  Absolutely nothing comes before astronaut safety.  Not a presidential visit, not millions of viewers, not politics…nothing.  So, when an Auxiliary Power Unit heater didn’t seem to be working correctly, they delayed the launch. I was astonished at the overwhelming pride and sense of responsiblity that the NASA employees who spoke to us expressed for each mission and every human life that we send into space.

The astronauts who spoke to our group were amazing, accomplished individuals with a unified message: be curious, work hard in school, and follow your dreams.  Any kid who wants to be an astronaut has that potential. And parents…it’s our job to fan that creative, imaginative, curious spark in our kids, whether it’s by letting them bang on some pans (Astronaut Leland Melvin) to learn about sound, or simply to encourage them to do something that might seem out of reach. (NASA Astronaut Ricky Arnold is a teacher, not a military man.)

You’ll be hearing more about the astronauts soon, but I’m off to the Kennedy Space Center Visitor’s center for the afternoon for a final day of space immersion before I head home.  Next week, I’ll post video of the astrovan turning around and write a lot more about what I learned.  I’m even bringing home a sample of “aerogel” from NASA’s Jet Propulsion Laboratory in California!

Tags: astronauts, nasa, tweetup
In: The World Around Us, Uncategorized | No comments »

I was thrilled to get my first question from a student named Ian yesterday! He asked how the space shuttle Endeavour got her name.

When NASA invited students to name the new shuttle they were building, over 70,000 kids replied to the challenge. You can read more about the contest on NASA’s website, but here’s why Endeavour was the winning name:

“Endeavour was the most popular entry, accounting for almost one-third of the state-level winners. The Endeavour was a ship belonging to the British Royal Navy. In their entries, students focused on the vessel’s first voyage under the command of seaman and scientist James Cook in 1769-71. Cook steered Endeavour to Tahiti in the South Pacific to observe and record the rare event of the transit of Venus, a celestial event that allows observers on Earth to see Venus passing across the face of the sun.

Students drew parallels between astronomy on Cook’s Endeavour and on the space shuttle; the payloads of medicine, science and commerce that were on both the ship and shuttles; and the make-up of the crews, both of which included scientists.” www.nasa.gov

A great name, don’t you agree?

Tags: Endeavour, nasa, tweetup
In: The World Around Us | No comments »