I was thrilled to get my first question from a student named Ian yesterday! He asked how the space shuttle Endeavour got her name.

When NASA invited students to name the new shuttle they were building, over 70,000 kids replied to the challenge. You can read more about the contest on NASA’s website, but here’s why Endeavour was the winning name:

“Endeavour was the most popular entry, accounting for almost one-third of the state-level winners. The Endeavour was a ship belonging to the British Royal Navy. In their entries, students focused on the vessel’s first voyage under the command of seaman and scientist James Cook in 1769-71. Cook steered Endeavour to Tahiti in the South Pacific to observe and record the rare event of the transit of Venus, a celestial event that allows observers on Earth to see Venus passing across the face of the sun.

Students drew parallels between astronomy on Cook’s Endeavour and on the space shuttle; the payloads of medicine, science and commerce that were on both the ship and shuttles; and the make-up of the crews, both of which included scientists.” www.nasa.gov

A great name, don’t you agree?

Tags: Endeavour, nasa, tweetup
In: The World Around Us | No comments »

This fun activity will teach you a little bit about rockets. It is from one of NASA‘s educational websites and the great rocket template you’ll find below is provided by the Jet Propulsion Laboratory at the California Institute of Technology. 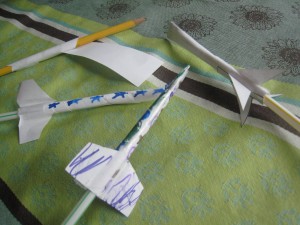 All you’ll need is a plastic soda straw, some paper, scissors and tape.  For the body of your rocket, you can use this template or simply cut a strip of paper an inch or two wide. If using the template, wrap the rectangle of paper around a pencil and tape it into a tube.  If you’re using a strip of paper, wind it around a pencil (as pictured above) so it forms a tube. Tape it well, so it holds its shape.

Now, remove your rocket from the pencil, fold one end over and tape it down.  This will be the nose of your rocket.  To the other end, you can make fins using the template, or design your own fins to tape on. Fins work best at right angles, or near right angles.  Now you can decorate your creation. 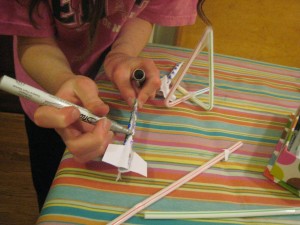 Put your rocket  over the end of a straw and use the force of your breath to launch it!  How far does it go?  Try making longer and shorter rockets. What happens if you change the shape or number of fins?  Record your flight lengths.

What does this teach you?  Paper rockets demonstrate how real rockets fly through the atmosphere and some of the forces working on them!

Drag is the force of air getting in the way of your rocket.   Weight also drags your rocket down as gravity pulls on it.  The lighter you make your rocket  (less paper, less tape), and the less drag it has, the farther it will go!

Fins stabilize the rockets’ flight.  The size and design of the fins affect how well it can be controlled.

Email me a picture of your best rocket and I’ll post it on my site! We shot some straw rockets at the Kare11 studio, if you want to see them in action!