We kicked off a new experiment today in honor of upcoming Earth Day. Details and an Earth Day experiment “round-up” coming soon! 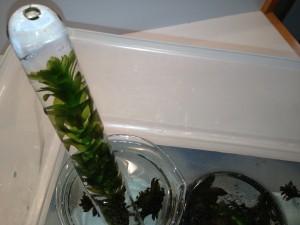 Joseph Priestly was an amateur scientist who started out doing experiments in his kitchen sink. Eventually, he was credited with being among the first scientists to isolate oxygen. He noticed that in a sealed container, fire burned something away that animals needed to survive (oxygen) and that plants could replace this mysterious element. This research inspired him to become one of the earliest natural philosophers to hypothesize about the science of ecosystems.

What sparked Priestly’s creative genius? Steven Johnson, the author of “The Invention of Air” guesses it might be the fact that he played with spiders in jars as a kid and always wondered why they couldn’t survive for long after the lid was sealed. It also didn’t hurt that Joseph Priestly had friends like Benjamin Franklin to toss his ideas around with.  In addition, he wrote a number of books, advised Thomas Jefferson and was a founder of the Unitarian church.

Finally, if you like soda, you have Priestly to thank for the invention of soda water.

What inspires you to be creative?