In the movie Jurassic Park, a tale of genetic engineering gone bad, scientists arrive on an island to find that an all-female population of resurrected dinosaurs may have found a way to breed.   The following conversation ensues: 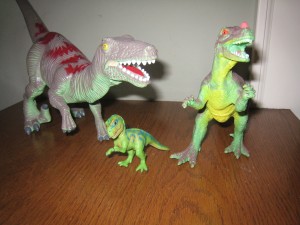 As we find out later in the movie, the dinosaurs have indeed been breeding.

Salmon farmers tell us that a proposed population of genetically modified “super salmon“ will be composed entirely of sterile females, making it impossible for them to mate, should they escape to the wild.  Some consumers are fighting FDA approval of the fish as food and say consumers should be alerted to the fact that they are purchasing the genetically engineered fish (by way of labeling.)

Advocates of the super salmon claim the meat from the new super salmon is indistinguishable from that of their natural cousins.  However, critics fear that the new “frankinfish” may pose danger to both consumers and to the environment.

Super salmon are Atlantic salmon that have had a gene (DNA) for a growth hormone normally made by Chinook salmon  inserted into their genetic map.   In addition, scientists have put some DNA from another ocean fish, called a pout, in front of the growth hormone gene to keep the fish’s body pumping out growth hormone all of the time.

The don’t get bigger than natural salmon, but they grow much faster.  This creates a potential threat to wild salmon, should the modified salmon escape from fish farms.  (They would potentially out-compete and out-breed their natural counterparts in the wild.)

Despite claims that super salmon will all be sterile females, one article I read mentioned that ” a small percentage might be able to breed. They would be bred in confined pools where the potential for escape would be low.”  Another stated that the FDA says that up to 5% of the eggs may be fertile.

Genetic engineering has resulted in many products that make people’s lives better, but we have to be aware of the danger it poses.  Microbes, plants and animals can swap DNA and genetically modified organisms are already finding ways to invade the natural world.

Life finds a way, whether we want it to or not.  It is not something to be taken lightly.

Tags: gmo, problem, salmon
In: The World Around Us | No comments »