My son is obsessed with UFOs.  Every time we go outside at night, he scans the sky for moving spots of light.  I tend to be dismissive, brushing off his imagination like a pesky fly, worried that he won’t go to sleep for fear of an alien invasion.

It’s not that I’ve discounted the possibility that there may be intelligent life elsewhere in the universe (I love Star Trek as much as the next geek), but it’s always seemed unlikely to me, and not worth much thought. 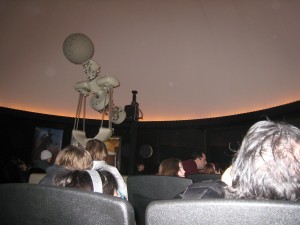 A  field trip to the planetarium with my son’s class last week gave me new perspective though.  After the requisite, but fun voyage through the constellations we see from our own green and blue planet, our guide turned on a second projector.  We virtually zoomed away from earth, escaped our tiny solar system, and flew out of our galaxy to view a dazzling array of billions of galaxies sparkling like jewels in the vast universe.

I walked out of the dark room in a daze, feeling like a speck of cosmic dust and filled with absolute certainty that my 10-year old is much smarter than I am.  Last night I caught myself scanning the night sky, imagining aliens.  It made me smile.

Tags: planetarium
In: The World Around Us | No comments »