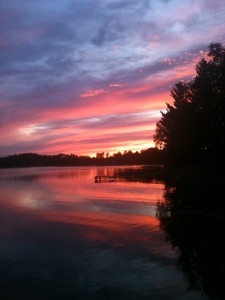 When Krakatoa erupted in 1883, the explosion and resulting tsunamis killed around 40,000 people, forever changed the geography of the East Indies, spewed tons of sulfur dioxide and ash into the atmosphere, and resulted in some of the most spectacular sunsets in recorded history. Artists and writers around the world tried to capture the blazing sky on paper, and some speculate that the psychedelic sky in Edvard Munch’s “The Scream” was inspired by a Krakatoa sunset.

Why are sunsets red? And how would volcanic ash make them even redder?

The colors we see depend on the light waves that are reflected and absorbed by the things around us. For example, grass looks green since it absorbs most of the visible light waves except green, reflecting that color back at our eyes.  Things that look black absorb all the colored light waves. Blue light has a short wavelength, and easily bounces off surrounding particles (called scattering), while red light has a longer wavelength and is more difficult to scatter.

The oxygen and nitrogen that make up most of our atmosphere are good at filtering out blue and violet light, but your eyes are good at seeing blue light and sunlight doesn’t have to travel though much atmosphere when it’s directly overhead, so the sky looks blue on a sunny day.

The ash from Krakatoa was a very effective blue light filter, making the skies so red that fire engines were called out in New York.

To see how particles scatter light, fill a plastic container with water and shine a flashlight through it on to a white piece of paper. The light should look white. 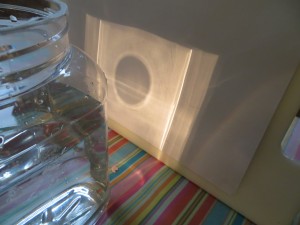 Now add a few drops of milk to the water and shine your light through again. Does the color change? What if you add more milk or use a longer container, so the light has to travel farther? 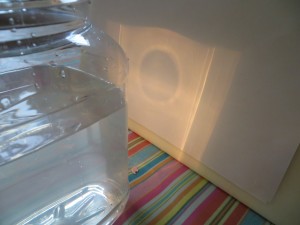 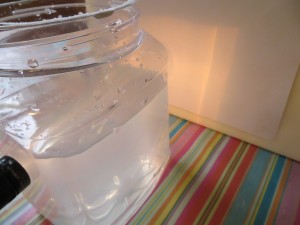 What happened? Imagine that your flashlight is the sun and the milky water is the lower atmosphere.  The molecules in milk are filtering out the blue light in your flashlight beam, allowing you to create your own red “sunset.”

In: Uncategorized | No comments »