After spending a weekend relaxing at my parents’ cabin, watching loons, eagles and osprey fishing in the lake, we headed north to Ely and got close up and personal with some much larger Minnesota predators at the North American Bear Center and the International Wolf Center.  Our French visitors were especially excited to experience our wildlife, since bears and wolves have been completely eradicated from their own country.  They informed us that there was only one bear and a few re-introduced wolves left in France.  Fortunately for us, the United States’ depleted wolf and bear populations are coming back thanks to the efforts of organizations like the bear and wolf centers.

At the Bear Center, we watched black bears Ted, Honey and Lucky snack and play from a balcony just above their habitat.  We learned that black bears are much less aggressive than grizzly bears and can usually be scared away from campsites by yelling, clapping, and throwing things at them.  They are also very unlikely to attack people in defense of cubs, which is a grizzly bear trait.  The bears were playful and the 2-year old cub Lucky was especially fun to watch! You can watch these amazing animals live via the “bear cam” on their website at www.bear.org. 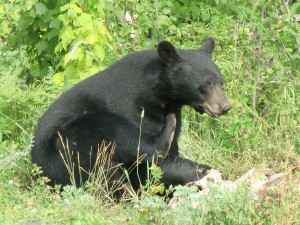 Across town, which isn’t very big and is filled with enough canoes and Duluth packs for an army, you’ll find the International Wolf Center.  This organization, whose mission is to advance the survival of wolf populations by teaching about wolves, their relationship to wildlands and the human role in their future, has put together an extensive collection of information about wolves in myth and reality (including lots of cool werewolf legend stuff for “Twilight” fans.) Best of all, the facility houses a pack of four wolves living in a viewable habitat behind the facility.

The pack changes over the years, as new wolves are introduced and the pack dynamics change.  Two arctic subspecies of the gray wolf, Malik and Shadow, born in 2000, were recently put into “retirement” when they got older and the younger wolves got too aggressive with them. Currently, the pack consists of Grizzer and Maya-two great plains subspecies born May 5, 2004 and Aidan and Denali, two northwestern subspecies, born on April 27, 2008.  The wolves weren’t too active when we were there, but at one point, two of them came close to be scratched by some wolf center workers and another took a nap right in front of the viewing window. 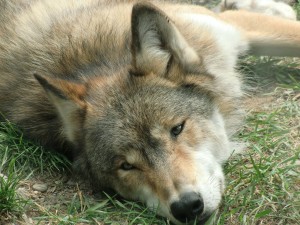 The wolves looked like leggy huskies close up and we learned that they have  bigger feet (for chasing prey in the snow) and much stronger jaws than domesticated dogs.  We also learned that their bodies are made to survive nearly two weeks without food, since they only bring down their prey thirty percent of the time.  The wolves at the center are only fed once a week, but you can see them eat if you’re there on the right day.  They eat everything except the stomach of their prey, since the stomach contains plants, which they can’t digest.

You can go to www.wolf.org to read more about wolves and watch their wolf pack live on webcams! 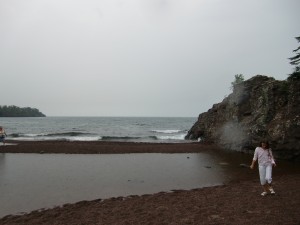 We finished the road trip by weaving our way through tall pines and past hidden lakes to the majestic shores of Lake Superior, where we took the scenic highway down the North Shore.  Stopping to play on the rocks and hike down to the lake at Gooseberry Falls State Park was a highlight of the trip, even as rain started to fall.  My husband looked like a kid again as he waded smiling into the frigid water of Lake Superior and stomped around in the waves.  I felt thankful to live in Minnesota and for all the efforts people have made to preserve our wilderness and nurture our native species.