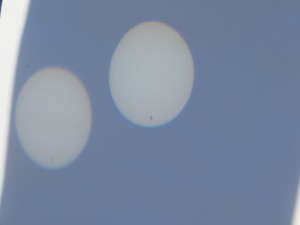 Our viewer is working really well! See Venus? We put a piece of paper behind the binoculars to get a bigger dark area on our viewer.

Although our pinhole viewers were great for watching the solar eclipse a few weeks ago, I was hoping to get a bigger projection of the sun’s image to watch the transit of Venus. (Venus is approximately the same size as earth and will be harder to see as it passes in front of the sun.) 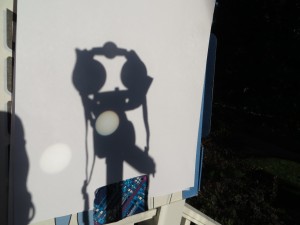 With a pair of binoculars and a tripod, you can project the sun’s image on a piece of white paper so that it’s large enough to see even some sunspots.
DO NOT LOOK AT THE SUN THROUGH THE BINOCULARS!!!
Simply attach them to your tripod so that the eyepieces are pointing away from the sun and the bigger ends are pointing toward the sun. We used duct tape. The sun should be behind the binoculars.

Hold up a piece of paper and adjust the angle of the binoculars on the tripod until you see double suns (there are 2 lenses) appear on your paper. If you can, adjust the angle further so that one of the images appears in the middle of the shadow of the binoculars. This will make it easier to see. You’ll notice that the further from the binoculars you hold the paper, the bigger the image will appear. It will get out of focus if you hold it too far away though.
We taped our white paper to a shoebox that we’ll be able to set on something when we watch the transit and won’t have to hold it the entire time!

Here’s a great article from today’s Science Times about the Transit of Venus.