Did you know you can capture the sun’s energy in a solar oven and use it to cook food? Using a pizza pox, you can make an oven that will heat up to almost 200 degrees F on a sunny day (and will only take you 10 or 15 minutes to put together.) Try doing this on a hot, sunny day to get the best results. Kim Insley, from Kare 11 news, visited our backyard the other morning to make a pizza box solar oven and cook s’mores.

My friend Sheila, an engineer at NREL (the National Renewable Energy Laboratory), suggested we try this project. NREL’s website has great information on solar energy and many other sources of renewable energy.

You will need: 1 pizza box from a local pizza delivery store, newspapers, tape, scissors, black construction paper, clear plastic wrap, aluminum foil and a dowel or stick to prop the lid up.  You’ll also want to have some food to cook in your oven, like marshmallows or hot dogs.

Make sure the cardboard is folded into its box shape.   Carefully cut out 3 sides of a square in the lid of the box.  Do not cut out the fourth side of the square, which is the one closest to where the pizza box lid hinges.  Gently fold the flap back along the uncut edge to form a crease.  See photo below!

Wrap the underside (inside) face of the flap that you made with aluminum foil.  Tape it so that the foil is help firmly but so that there’s not too much tape showing on the foil side of the flap.

Open the box and place a piece of black construction paper so that it fits the bottom of the box.  Tape it by the edges. (We used two pieces.)

Roll up some newspaper and fit it around the inside edges of the box.  This is the insulation.  It should be about 1-1 ½” thick.  Use tape (or other materials you can think of) to hold the newspaper in place.  Tape it to the bottom of the box so that you can close the lid. (We taped it to the sides and had to cut the tape so that we could close the lid.  Luckily our newspaper fit in tightly enough that we didn’t really even need the tape.)

You’re almost done!  According to NREL, the oven works best sitting at an angle facing the sun directly so you’ll need to make a prop.  You could probably just use a book or something under the hinged side of the oven.  However, I missed this when I read the directions and we just put it flat on the ground.  The flap of the box top needs to be propped open—a dowel or ruler works great.   We used a wooden skewer that I broke the sharp point off of.  This way you can change the amount of sunlight striking the oven window.

Put your food in the oven on a piece of saran wrap or a dark plate and close the lid, but remember to leave the flap open. Play with the angle of the flap to see how much sunlight you can get to reflect on the food. 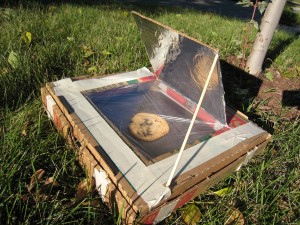 Try making s’mores, or heating up a hot-dog in your solar oven. It may take a while for your oven to heat up, so be patient.

How do solar ovens get hot enough to cook food? Ultraviolet rays from the sun go through the plastic wrap and are absorbed by the black paper. The sun’s energy is converted to lower-energy infrared rays, which don’t have enough energy to escape back through the saran wrap and are trapped in the pizza box. The saran wrap is a good illustration of how greenhouse gases, like carbon dioxide and methane, can trap the sun’s heat on a larger scale, causing the “greenhouse effect.” The newspaper insulation helps keep the heat in the box as the temperature rises.

How do you think the aluminum foil helps make the oven hotter?