If you have a pond nearby, gallons of science projects await! Not only can you collect tadpoles and watch them change into frogs before your very eyes, but there is a microscopic world in every drop of pond water.

Grab a bucket, or whatever container you can find, and fill it with pond water. Be sure to scoop up a few inches of muck from the bottom when you fill your bucket, since lots of cool things live in muck.

Let the murk settle and peek into your bucket. Can you see any tiny creatures swimming around? Grab a magnifying glass, or if you’re lucky enough to have a microscope, see what else lives in the water. 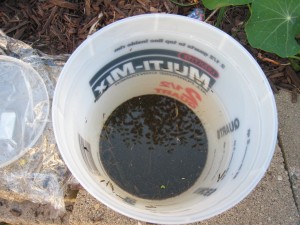 There are special bacteria, called magnetotactic bacteria, that live in the mud of many ponds. Bacteria are tiny organisms made of just one cell, and these magnetotactic bacteria make tiny magnets called magnetosomes, which they store in microscopic “sacs” inside their single-cell bodies. The magnets in their bodies are arranged in long chains, and tell the bacteria what direction to swim. Not only do magnetotactic bacteria swim toward the nearest pole, but they swim down toward magnetic forces deflected through the earth’s center, which is made of molten metal. This helps them survive, since the oxygen in air can kill them and the nutrients they need are in the mud.

To grow your own magnetotactic bacteria, cover your bucket of muddy water and put it in a dark place (so algae won’t grow) for about a month. Take out a jarfull of the water and set a magnet outside the glass. After a few days, if magnetotactic bacteria have grown, you should be able to see white substance in the water near one pole of the magnet. This whitish stuff is actually millions of bacteria, attracted to the magnet by the opposite magnetic charges in their own bodies. If you have a microscope, collect the bacteria with an eyedropper and observe them. What happens if you set a magnet next to them?

Try growing these bacteria from water and mud from different ponds in your area. There are over 12 different strains of magnetotactic bacteria, and scientists are very interested in them. Not only do they have great possibilities in biotechnology and nanotechnology, but they may be clues to life on other planets. Magnetosomes in long chains, like those in bacteria, have been found in meteorites from Mars!