I’m reposting this experiment at the top of my blog, since I’ve been telling everyone about it. Most of my projects use things you already have around the house, but this is worth a trip to a camera store to get some film canisters! 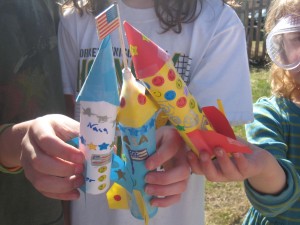 Three important forces act on rockets:  THRUST (the force lifting the rocket), DRAG (force acting against the rocket caused by air resistance) and WEIGHT (the force produced by gravity dragging down the weight of the rocket.)

You can make your own rocket using a film canister. The clear kind with a lid that pops into the end works best and most stores that develop film will give you discarded canisters if you ask nicely! You’ll also need water and an effervescent tablet, like Alka-Seltzer, or Airborne to create the THRUST to launch your rocket into the air. Paper, tape and markers will help you make a longer rocket with fins (for stability) and of course, cool decorations.  Here’s a quick video on how to make these rockets, followed by more detailed instructions and a little more physics! Astronauts are very safety conscious, and you should be too!  WEAR SAFETY GOGGLES WHILE DOING THIS EXPERIMENT!

To make a rocket, cut paper into a rectangle (maybe 6″x4″), tape it to the film canister with the edge tight against the open side of the canister,

wrap it around to make a tube, and tape it tightly.  Next, trace a drinking glass,

cut a pie-shaped piece out of it out, and roll it into a cone. Tape the cone to the end of your rocket (opposite the film canister.) Finally, tape fins on the rocket

To launch your rocket, put your safety goggles on and chew a piece of gum. Stick the gum into the inside of the film canister lid and firmly stick half an Alka-Seltzer or Airborne tablet in the gum so it won’t fall out.
Fill your film canister 1/3 to halfway with water and find a flat surface to set your rocket on. When you’re ready, firmly grasp the film canister end and, holding it upside down, pop the lid on TIGHTLY. 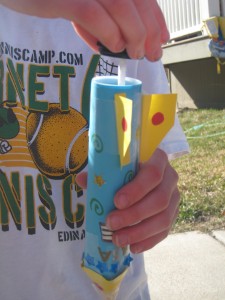 Flip your rocket over to begin the reaction and quickly set it on the flat surface you chose. Stand back and wait for the pressure (formed by the chemical reaction between the tablet and water) to build up and blow the lid off the canister, launching your rocket in to the air. Be patient, since it may take 30 seconds to a minute!

What happens? Pressure builds up inside the canister as carbon dioxide gas is produced by the chemical reaction. The gas is then rapidly expelled from the film canister when the lid blows off. This pushes the rocket in the opposite direction, demonstrating Newton’s third law: for every action, there is an equal and opposite reaction (THRUST.) DRAG and WEIGHT quickly bring these rockets back down. We shot a few film canister rockets off in Kare11’s studio and they almost hit the rafters!

Real rockets have enough fuel to produce enough thrust to carry them outside the earth’s atmosphere.